The homeowners association at the Packard condominium plans to file a lawsuit this week against developer Kosene & Kosene Residential and other companies, alleging the 62-unit building downtown was "improperly constructed and is deteriorating."

Inspectors hired by the association found the condo building's exterior walls are rotting and 16 units have mold because the building was constructed without required weatherproofing to allow water to escape from behind the façade, said Tom Blair, a board member.

The association plans to spend $2 million to $3 million on a six-month repair project that includes removal of the existing façade to the studs. Windows and doors would be removed at times, but residents would continue living in their units. The city's Division of Planning gave its administrative approval for the project on June 22. 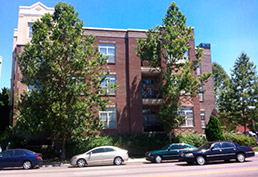 Inspectors have found that the 8-year-old Packard's exterior walls are rotting, and that 16 units have mold. (IBJ Photo/ Greg Andrews)

Blair said the association can't afford to wait for a resolution to the lawsuit to begin the fixes. A construction loan will cover project costs until a judge decides who is ultimately responsible for the bill, he said.

Kosene finished the three-story Packard building at 450 E. Ohio St. in 2004. The company managed it until 2010, when the homeowner's association brought in its own management company.

Kosene & Kosene principal Gerry Kosene acknowledged "some legitimacy" to the concerns raised by residents, but he said it wasn't yet clear which subcontractors were responsible or how inspectors missed the problems. He noted the company has insurance that should cover the cost of any repairs.

"We know they've alleged certain things," Kosene said. "We're having our consultants go through it. Certainly it's a black mark, but we have people we relied on who didn't come to the table."

Kosene & Kosene Residential also is facing allegations of shoddy construction from residents at its 70-unit Hudson condominium, which it finished in 2006 a few blocks west of the Packard at 355 E. Ohio St.

The Hudson lawsuit says residents last year began noticing cracks in the first-floor walls and ceiling, and a slope in their floors. An engineering firm hired by the homeowners association concluded that improperly installed truss hangers had slipped, causing the floor trusses to move.

There was no estimate on what those repairs would cost.

Blair, the Packard board member, said the association consulted with two engineering firms that agreed on the repairs required. The plans call for a new façade made up of brick and Hardi-plank siding to replace the existing brick and stucco. The new materials would be of a similar color to the existing ones.

He said the lawsuit will name multiple defendants involved with the construction of the condo building.

"It's a problem that has plagued the building from the beginning," Blair said.

Jeff York, a veteran city planner, said he couldn't recall another case where a newer building had serious enough defects to warrant a new facade.