Home » Banks eager to loan, but small firms hold back

Griner Engineering had a crack at a lucrative contract with a first-tier automotive supplier last year, but founder and President John Griner needed a loan for new equipment.

Griner borrowed a total of $3.5 million from Huntington National Bank in April 2011 and in September this year. He grew his Bloomington precision-turning shop from 45 employees to 60. “The large multi-national companies seem to be doing quite well, but in general, small business does need to have assistance with financing,” he said. 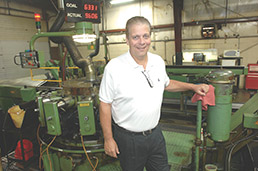 The deal might not have been possible had the U.S. Small Business Administration not raised its ceiling on borrowing from $2 million to $5 million, said Mike Newbold, Indiana regional president at Huntington.

Huntington fretted that a $3.5 million loan would have put a disproportionate amount of debt on Griner’s balance sheet, disqualifying it from conventional lending, Newbold recalled. So the bank shifted the company to its government-backed loan program.

“It is very much having the effect folks in Washington wanted it to have,” Newbold said of the new SBA lending limit.

recession ended, but the success is hard-won because the masses of entrepreneurs remain cautious about borrowing.

“The banks are trying hard. We clearly see that in the data,” said William Phelan, president and co-founder of PayNet Inc., a Skokie, Ill., firm that collects loan information from more than 250 leading banks. “Credit-approval rates are higher than where they were before the recession. Terms of the loans are more liberal.”

However, the Thomson/Reuters Small Business Lending Index, compiled by PayNet, fell through most of the first half of the year. Phelan attributed the trend to lack of borrowing demand. “It’s kind of like pushing a string,” he said.

Recent SBA data for Indiana show that larger transactions are driving the total dollar volume of loans, putting Indiana banks on track for the second-best year on record. But the number of transactions will likely fall below 2010 levels.

Indiana banks had loaned $384.6 million as of Aug. 31, a pace that would put the total around $417 million by the time the fiscal year ended Sept. 30. Year-end data was not available at IBJ press time.

The prior fiscal year, total lending soared to a historic $520 million spread over 1,451 transactions, as the federal government waived borrower’s fees and bumped its guarantee level to 90 percent. Those incentives expired last year, but the $5 million ceiling was made permanent.

This year’s transaction total, 1,136 through August, will likely come up short of last year and 2010 as well. With more dollars applied to fewer loans, the average deal is worth $81,370, or 31.6 percent, more than two years ago.

Looking at all loans under $1 million, Laderman found that activity is still on the decline. Banks nationwide signed off on $526 billion in loans through June 30, a 2-percent drop from the prior year.

Sluggish lending by small banks whose own balance sheets remain weak dragged down the total at the end of 2011, Laderman said. Now she hears that lack of demand could also be a factor.

“At least in this part of the country, the stories are pretty much uniform,” Laderman said. “There’s a lot of competition to find good small businesses to make loans to.”

The Indianapolis market’s top small-business lenders are seeing even more competition for those loans.

First Financial isn’t among the top SBA lenders in Indiana, but Executive Vice President Jill Stanton said the bank hopes to change that. Meanwhile, most of its small-business clients, defined as those with borrowings under $1 million, are qualifying for conventional lending terms.

Indianapolis-area bankers aren’t complaining about the current environment, but they do hear clients say they’re hesitant to expand because of uncertainty about future taxes and health-insurance costs.

Huntington loaned $26 million over 205 transactions under the SBA’s main 7(a) program through Aug. 31.

The uncertainty is actually fueling some transactions at Cleveland-based KeyBank, which has a strong focus on business-acquisition financing, said Karl Zachmann, vice president and Indiana SBA sales manager.

Business owners who are close to retirement and thinking about selling worry that the capital-gains tax rate will rise next year, cutting into their profit. “So they’re selling their businesses this year,” Zachmann said.

KeyBank was on pace to top last year’s performance under SBA programs, loaning $21.6 million over 53 transactions through Aug. 31.

Much of the activity in Indiana is around owner-occupied real estate.

“Some companies are well-positioned, and they’re seeing some light,” Zachmann said. So they’re taking advantage of low interest rates and low prices to become their own landlords, he said.

The number of SBA-backed loans for buildings, construction and major equipment in Indiana was up 60 percent from last year, as of Aug. 31, Indiana District Director Gail Gesell said.

The SBA backing lets borrowers into a deal with a 10-percent to 20-percent down payment, and the amortization stretches over 20 years. Those terms are unheard of in conventional commercial real estate lending, Gesell said.

Medical practices appear to be taking advantage, as professional services, doctors, dentists and the like make up the largest lending category in Indiana, Gesell said. Next on the list? Restaurants.

“Which is interesting,” Gesell said. “I was always getting calls from people who wanted to start a restaurant, or buy somebody’s restaurant. They were so challenged to find a financial institution to support them.”

Restaurants comprise the largest lending category in Marion County, Gesell said. Banks generally shy away from financing restaurants because of their high failure rates, but buying the real estate behind an established eatery makes a lot of sense for the business owner because they tend to pay a lot of their own maintenance costs, anyway, she said.

The flurry of interest in real estate deals could be driven in part by refinancing needs. One provision of the  the 2010 Jobs Act, which stimulated so much lending last year, allows for refinancing of owner-occupied buildings under the SBA. That provision was set to expire Sept. 27.•