Overall, the market’s five largest banks maintained their rankings. New York-based JPMorgan Chase is No. 1, with nearly 25 percent of the deposits in the Indianapolis-Carmel metro area. 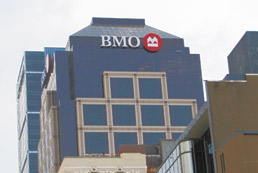 Total deposits in the area grew 5.5 percent, to $33 billion, according to FDIC data as of June 30 that was released Oct. 1.

Toronto-based BMO picked up 31 M&I branch offices in the local market, where it already had 11 Harris National offices. The bank combined the two into BMO Harris with 41 offices, FDIC data shows.

PNC lost $449 million in deposits and 2.5 percent of its market share over the year, while Fifth Third gained 1.4 percent, and Huntington gained 1 percent.

The Indiana-based bank with the largest market share is the National Bank of Indianapolis, which has $1.3 billion in deposits, or 4 percent of the market.

Some bankers don’t put much stock in deposit market share because the numbers can be skewed by large, institutional deposits.