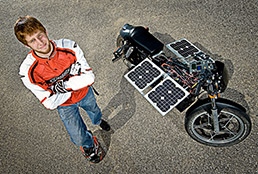 Coiro was hungry to put intellectual rubber to the road. So he converted a 30-year-old Suzuki motorcycle to run 24 miles on batteries and solar cells. Then he got Purdue’s help to file a patent for his design.

Was getting the patent a goal? No, said Coiro as he prepared to fly to South Africa this month to work for an early-stage company that specializes in alternative energy.

“It led me down the wormhole of entrepreneurship,” he said of the patent-filing experience. “I had the technical mind, but when it came to business I had no idea.”

The 2012 Purdue grad is among 355 students who, while at Purdue, filed a patent in the last year. That’s a 62-percent jump from 218 student-filed patents in the previous year.

At Indiana University, 45 students were considered lead inventors on patents. And nearly 80 IU patent applications had at least one student as a co-inventor.

Universities that once focused on faculty inventions have in some cases actively encouraged students to pursue patents.

“Faculty members are more inclined to support the students in these non-traditional types of academic endeavors,” said Elizabeth Hart-Wells, assistant vice president of the Purdue Office of Technology Commercialization.

It enhances the learning experience and creates the potential to generate more licensing revenue for the university.

In a recent survey by the Association of University Technology Managers, 12 percent of surveyed schools reported they now had more than 100 patentable or copyrightable student inventions each year.

Many of the inventions sprang from business plan competitions, entrepreneurship classes and boot camps, and incubators for student-owned companies. Purdue emphasizes all of the above.

Purdue’s Certificate in Entrepreneurship and Innovation program has awarded upwards of 1,000 certificates in the last seven years to students in various disciplines.

Such efforts underscore in students’ minds the need to protect their intellectual property. Students are also more entrepreneurially self-aware because of the success of such people as “cult hero” Mark Zuckerberg, the founder of Facebook, said Joseph Hornett, senior vice president of the Purdue Research Foundation.

“Some of it is what has been going on in the business world. [Students] are just more inclined to think they can do it, too,” Hart-Wells said.

Students are also more likely to launch their own firms because of dim employment prospects brought on by the sluggish economy.

“It’s been hard for college graduates to find the jobs they thought they were going to walk into,” Hornett added.

Or, sometimes, clever ideas spring forth in unexpected ways.

Jianming Li, who last year earned a doctorate in biomedical engineering at Purdue, was standing around a cotton candy machine with Sean Connell, a doctoral candidate in the field. They realized the spun sugar would make “really good bandage material,” recalled Li.

“We decided to try to develop a machine that would make polymer-based gauze dressings for wounds. Well, the clinicians we spoke to didn’t really care for the machine. So we scrapped the idea and started looking more carefully at [a] formulation.”

What they came up with was a topical antimicrobial technology to speed wound healing—and their own life sciences company, known as Medtric LLC, based at Purdue’s research park in West Lafayette.

Besides the two founders, Medtric has three part-time employees and a business manager.

Purdue helped the company work on the patent—a cost that can top $20,000. As the licensee of the technology developed at Purdue, the company will eventually reimburse the university for patent-related costs.

That shouldn’t be a problem if their projections for over-the-counter sales to consumers and sales to hospitals come true.

Li said he’s looking at a first-half 2013 over-the-counter product launch, followed by a clinical version. Also, “we are seeking partners in areas outside of wound care for sublicensing opportunities,” said Li, Medtric’s chief scientific officer and an assistant research professor in the Center for Paralysis Research at Purdue.

On the other hand, recent Purdue physics grad and electric motorcycle developer Coiro isn’t taking his patented technology to market, at least not for now.

He sees a greater immediate need in bringing alternative energy sources—such as solar, wind or biomass—to parts of the world where relatively inexpensive energy such as coal-based generation is not available.

He’ll pursue that at his new employer in South Africa, where rolling electricity blackouts are common. Coiro recently worked at Indy Power Systems, which is developing technology that can seamlessly integrate and manage several types of power generation devices.

An electric motorcycle might be in the works—eventually. Coiro, who co-founded the Purdue Electrical Vehicle Club, is still passionate about the concept and sees India and other countries beset with congestion and pollution as candidates for electric motorcycles. For now, he’s looking at any number of ways “to use technology to improve people’s lives.”

Second nature to next generation

The longer-term trend of college students’ developing patentable technologies may have nothing to do with colleges deliberately encouraging it.

K-12 students are growing up with computer technology and increasingly have an eye for commercial prospects before starting college.

Among them is Alec Gorge, a freshman studying computer science at Purdue. Fellow former Brebeuf Jesuit Preparatory School student Kevin Lehtiniitty, with help from Gorge, founded the Indianapolis-based Web design and IT firm Tinitt while still at Brebeuf.

Gorge has his own software firm, known as Ramblingwood, which makes iPhone apps, among other things. One free app helps reformat for mobile phones content on the K-12 website communications platform Edline.net.

Edline contacted Gorge and said “not to charge for it or they’d sue me,” he recalled. He didn’t mind, because he saw the experience as a way to develop business skills more than as an income source.

Gorge credits the entrepreneurial advice he got from his father and opportunities at Brebeuf that emphasized technology as part of education. Brebeuf recently installed a wireless system that allows students to use their own mobile devices to access educational course content, lectures and other resources. They can even use their devices to take videos of lab demonstrations for study outside the classroom.

Brebeuf used to make tablets available on a cart that traveled through the school, but that didn’t give students 24/7 access. The purpose first and foremost is educational, not to foster entrepreneurship, “but I certainly think it can influence it,” said JD Ferries-Rowe, chief information officer at Brebeuf.

Lehtiniitty and friends like Gorge helped install wireless systems at the school, then developed a 40-inch touch-screen device in which students could access an alumni directory. They even turned it into an iPad app.

The recent graduates, through their Tinitt firm, just developed a new website for Brebeuf that will go online soon and will earn the graduates some money.

Whatever Gorge ultimately does when he earns his Purdue degree years from now, “the entrepreneurial aspect will never go away. No matter what happens, I’ll always have a Tinitt or a Ramblingwood,” he said.

A patent would be icing on the cake.•