Serving as CFO at a big, established firm can feel like piloting an ocean liner, but CFO Steve Collins’ tour of duty at fast-growing ExactTarget has been more like a rocket ride. In his two years overseeing the company’s finances, he’s worried not about belt-tightening and staff reductions, but about how to manage white-hot growth.

“We serve a segment of the market—interactive marketing—that has proven to be recession resistant,” Collins said. “Our lowest growth year was in 2009 when we still grew 32 percent over the prior year. We made the decision during the downturn to continue hiring and growing our business, which at the time was a risky decision. We believe our investments paid off.” 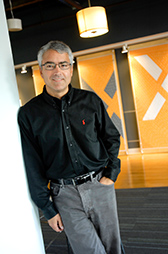 Civic Involvement: Assisted in the
establishment of the not-for-profit
Exact Target Foundation; held leadership
roles in the United Way, the Boys
and Girls Clubs of America and Junior
Achievement

Hobbies: Watching and playing sports,
including golf, tennis and basketball

That must be true, because during Collins’ tenure the company also decided to go public—a move that sounds about as logical as swimming during a hurricane. He, CEO Scott Dorsey and other members of the management team crisscrossed the nation in 2011-12, conducting more than 100 analyst and investor meetings. The result was ExactTarget’s $150 million debut on the New York Stock Exchange.

“We believe it was the largest IPO ever for a Software-as-a-Service company in terms of initial market capitalization,” Collins said. “For my team, planning for the IPO meant months of nonstop work developing our long-term financial model, improving our forecasting accuracy, preparing SEC filings, and developing our internal business systems.”

Not that he got a chance to catch his breath after the IPO. This year the company expanded into Germany, acquired Atlanta-based Partod Inc, and also Indianapolis-based iGoDigital.

Though economists predict a tepid 2013 for the general economy, things look considerably more balmy inside the torrid microclimate at ExactTarget.

“We continue to be bullish on the prospects for our company and the interactive marketing sector that we serve,” he said. “This optimism is evident in our decision to increase our pace of hiring throughout the year. With our belief that our sector is fairly recession resistant, we don’t have to project accurately what the general economy will do, as we think we can grow effectively in almost any economic environment.”•