Though Thomas P. Fischer’s office sits about a mile from the nearest hospital bed, he’s nevertheless been instrumental in improving medical care for thousands of people who likely don’t even know he exists. That’s because he’s CFO for Community Health Network, an integrated, not-for-profit healthcare system with more than 200 central Indiana care sites and affiliates.

A self-proclaimed “numbers guy,” Fischer uses his skill with a balance sheet to keep the constellation of medical facilities humming smoothly. “He draws great satisfaction from working essentially behind the scenes, doing his part to ensure that caregivers can give their best,” said Community CEO Bryan Mills. “It’s important to him that doctors, nurses and others are able to focus their attention solely on patients.” 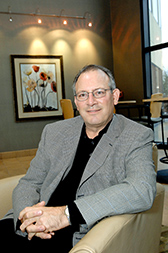 What makes him such a rarity in health care is his previous work experience. Before launching his own advisory firm in 1994, he served as a health care investment banker for three firms in Chicago and New York between 1984 and 1994. Not surprisingly, this gives him a deep understanding of the capital markets’ workings.

Since he joined Community in 2005, the network has added new affiliations with Community Westview Hospital and Community Howard Regional Health, and a clinical collaboration with Johnson Memorial Hospital. The group also completed a more than $100 million expansion of Community Hospital South, added multiple new health pavilions across the region and is building a new rehabilitation hospital and cancer center.

All of this was done at a time when it was difficult to get money for pretty much any type of capital project. In 2009, when other health care providers around the state were abandoning construction projects in the face of the economic meltdown, Fischer obtained financing for the network’s Community South expansion from a local bank.

“We struggled in many of the same ways our customers did,” he said of the downturn. “We were fortunate in that our financial management style is not very ‘flamboyant.’ We try to stick to the basics, get them right, and remember why we are in business—to serve our customers.”

One of his biggest achievements was his work to improve Indiana’s disproportionate share hospital program, established to make sure Hoosier hospitals serving an unusually high share of the lowest-income patients get the money necessary to deliver that care.

Prior to Fischer’s improvements, the program sported what some called a “DSH cliff” that prevented many hospitals from obtaining adequate funding for their Medicaid patients. Fischer developed a “funding follows the patient” methodology, then worked with other hospitals, the state’s hospital association, legislators and state agencies to make the system more fair.

What does the future hold? “I believe the economy will get marginally better but am concerned by the unusually slow growth in good, middle class jobs here in Indiana and across the country,” Fischer said. “Community will continue to focus on its core operations, reducing its costs and being responsive to the needs of our customers.”•