Such modern buildings as the Conrad Hotel and headquarters for Emmis Communications Corp. and WellPoint Inc. could become part of a new historic preservation district for the Monument Circle.

The Indianapolis Historic Preservation Commission is proposing to take under its jurisdiction 90 buildings on and near the Circle, giving the city stricter control over signage and other changes to building exteriors. Notice of the proposal was sent to the property owners Monday, city officials said.

“I think a lot of people will be surprised to find it isn’t protected,” said David Baker, administrator of the preservation commission. Monument Circle is part of a National Register Historic District, but that federal designation doesn't create a local review process. 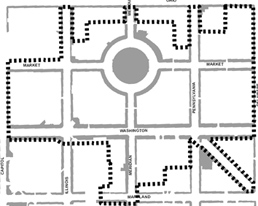 This map shows the boundaries of the proposed Monument Circle district, including some 90 buildings on or near the Circle. (Image/City of Indianapolis)

The proposed district would follow roughly the same boundaries as the federal district, but also take in buildings along Washington Street that aren't already captured by downtown's Wholesale District south of the Circle. The Monument Circle district would exclude Hilbert Circle Theatre and the Soldiers and Sailors Monument, as those are already protected.

Creating the district has been a priority for the commission since Circle Center Mall was built in the early 1990s, but staff didn’t have time to develop a plan, Baker said.

The not-for-profit preservation group Indiana Landmarks four years ago provided the city with enough money to hire consultants to conduct building inventories and help create the plan, which will be subject to two public hearings. The plan must pass the preservation commission as well as the Metropolitan Development Commission.

A community meeting is scheduled July 25 at the Indiana Landmarks Center.

Landmarks President Marsh Davis said there was no single event or change that prompted his concern. "There's always the possibility something unfortunate can happen," he said. “This is the preeminent cultural center not just of the city but the whole state.”

The Circle dates back at least as far as 1821, when it was included in the Plat of the Town of Indianapolis. It surrounded the intended site of the governor's house, according to "The Encyclopedia of Indianapolis." The Soldiers and Sailors Monument was erected bwteeen 1888 and 1901.

Baker said the historic district designation would not mean an extra layer of bureaucracy for property owners. A wide area in and around downtown is already covered by the Regional Center Plan, in which building and signage changes get a separate staff review and, if a project is worth more than $1 million, a separate public hearing. If the Monument Circle area is designated as a historic district, properties within it would no longer be subject to the Regional Center review.

The Monument Circle area is unique in that it represents a "mish mash" of architectural styles and periods, Baker said. Unlike in other historic districts, every building will be considered as contributing to the district's character, and thus subject to stricter standards.