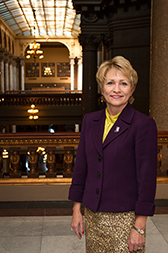 “He had no idea that’s my training,” she said. “It’s my doctorate and it’s what I spend a lot of time doing—encouraging groups to think through problems thoroughly, to consider many different approaches. Many problems won’t have one unique or right answer. Our job is to pull out the one that will serve Hoosiers best.”

Chosen as running mate by then-gubernatorial candidate Mike Pence, the Ferdinand native brought a variety of experiences to the ticket. An industrial engineering graduate of Purdue University, she worked her way through college as a cooperative education major with General Motors Corp.

After stints with Michelin and Frito-Lay, she gravitated back to Indiana and founded a consulting business, Ellspermann and Associates, in Evansville. While growing that company, she completed her master’s degree from the University of Louisville.

Before being elected to the Indiana House of Representatives in 2010, she became founding director of the University of Southern Indiana’s Center for Applied Research and Economic Development.

While in the House, Ellspermann had to wrestle with many controversial issues, including right-to-work legislation, funding for Planned Parenthood, and a statewide smoking ban in bars and restaurants.

Through it all, she said, “you have to have an extra level of respect for those different perspectives. In office, I learned that our job is not only to respond to what our constituents say, but to be an educational force with our constituents. As facts emerge, we have to make sure those are shared. That helps people come on board who may have come from a different point of view.”

For her, former Sen. Richard Lugar is the “gold standard” for public service. “He became my personal mentor when I explored running for public office. With him, it was problem solving before politics, always. Not worrying about taking credit. Just getting the job done.”

That can be tough to do in the current political climate.

“We have bad habits in politics, particularly with mud slinging,” she said. “Being a mother, I keep as a guiding principle that if I wouldn’t want my daughters to do it, I wouldn’t do it. I always act as if my daughters are watching—which they are.”

One of the problems in politics she sees is an expectation of easy answers.

“We’ve all become too ADHD in how we approach problems. We need instant answers,” she said. “But the process of studying issues—the process by which you get there—is as important as whether or not you got the right answer.”•