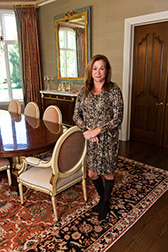 When you are the daughter of a billionaire, you have some options.

But how do you decide where to make a difference?

Her answer: “It has to be something that is near and dear to my heart.”

Friendships help, too. “A lot of times it’s people who I know who have introduced me to the board and interested me enough to get involved.”

“Behavior science is big for me,” she said. “It’s never treated with the respect that other health care has. We need to make it affordable for everyone and work on the stigma.”

The Samerian Foundation (named for her three children, Samantha, Erik and Ian) initially focused on programs for at-risk youth, such as the Indiana Sports Corp.’s CHAMPS grants. But Skjodt doesn’t limit herself.

“I do like to give to those grass-roots organizations where $1,000 can mean a lot. Since the downturn of the economy, a lot of these places have fallen by the wayside.”

She knows how to give big, recently gifting $1.5 million to the IU Lilly Family School of Philanthropy.

She sees her mother, Bess, as her philanthropic mentor.

“Even though she died young, she was always a gracious, giving woman,” Skjodt said. “And my father always taught us—and I hope I teach this—that we are really lucky people. That luck is nine-tenths of it. We are so fortunate in our lives that we need to help people who aren’t as fortunate.”

Skjodt and her husband, Paul Skjodt, are co-owners of the amateur Indiana Ice hockey team—a business venture that satisfies her in other ways.

“I grew up going to IU football and basketball games and I am proud of how, over the last 10 years, the Ice has helped a lot of these young men get scholarships to go to college. Even if they don’t go professional, at least they’ll have an education.”

Skjodt is on the board of 15 organizations, and her contributions are legion. A key focus now is her role as co-chair of the YMCA’s multimillion-dollar capital campaign.

“Right after my father passed away [in 2009], they named a gym after him,” she said. “They didn’t ask for money. They just wanted to do that because he came there when he was stationed at Fort Ben and played basketball there all the time.”

At meetings, Skjodt became impressed with the vision—and was fully aware of the challenges organizations face in raising money for big capital campaigns.

“It seems the same people give over and over again,” she said. “We need more people with income to get more involved. Frankly, we have a lot that don’t do what they could.”

When serving, Skjodt’s initial strategy is usually to sit back and listen.

“A lot of people like to talk on boards,” she said. “But I’m not a very demonstrative person. If I really feel strongly, no problem. I speak my mind. But I know that some people—a lot of people—know more than me. I want to listen to what they have to say.”•