Indiana has never seen a hospital quite like this.

From the spiraling wooden sculpture suspended from the ceiling in the main concourse to the vegetable garden on the roof, the brand-new Eskenazi Hospital in Indianapolis keeps you wondering what you will see around the next corner.

The $754 million hospital, which will serve mostly poor and underinsured patients, is nearly ready to open, after four years of planning and construction. The public was able to tour the hospital Saturday during an open house. 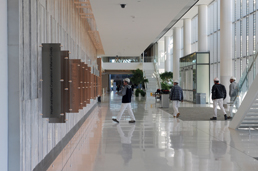 The massive complex, spread out on 37 acres, will replace Wishard Hospital, a deteriorating hodgepodge of buildings, some a century old. On Dec. 7, an army of hospital workers will move patients from the old building to the new one a block away.

The new hospital is the latest addition to Indiana's hospital construction boom over the last decade, a period in which more than $1 billion in new facilities sprouted up around central Indiana, from specialty heart clinics to luxurious medical centers in the suburbs.

Each of Indiana's dozens of hospitals seems to have a distinctive personality, from the luxurious Indiana University Health North Hospital in Carmel, with posh fireplace lounges and cherry wood bassinets, to the kid-friendly Riley Hospital for Children, with its signature red wagons and play rooms.

The feel at Eskenazi Hospital is bright and welcoming. Sunlight pours through windows in every patient room, waiting room and hallway. The public areas are filled with colorful art, from historical oil paintings to whimsical photographs of the city.

The goal, officials say, is to be comforting for people entering the doors for what is often a frightening, high-stress experience.

"We want this to be the most patient-friendly, family-friendly, simple-to-use hospital you can find," Matthew R. Gutwein, president and chief executive of Marion County Health and Hospital Corp., which operates the hospital, told The Indianapolis Star.

Eskenazi is much easier to navigate than Wishard. The hallways are straight, with 90-degree turns, unlike the endless twists and turns through the maze of adjoining buildings at Wishard. The elevators are color-coded, giving you clues to the right floor.

Inside and out, the hospital has distinctive touches. The front of the building features tall decorative fins that shimmer colorful light. The windows in almost every room or hallway give an impressive view of a garden, park or the downtown skyline.

The patient rooms are an impressive upgrade from the cramped, dated rooms at Wishard. All patient rooms are private, and only a few steps from the bathroom. Each room has a pullout couch for family members who want to spend the night.

Up on the rooftop, a 5,000-square-foot "Sky Farm" features a produce and flower garden laid out in neat rows. A nearby shed is filled with gardening tools. Patients and employees will be able to plant and pick fruits, vegetables and flowers, or just sit on a bench and gaze at the horizon.

"It's the kind of thing that keeps your spirits up, instead of just languishing in a hospital room," said Dr. Lisa Harris, the hospital's chief executive and medical director.

A grove of trees welcomes patients to the emergency room. A park in the front of the building, still under construction, will feature water gardens and a snack bar.

"It's a beautiful, contemporary hospital, but I wouldn't call it extravagant or glamorous," said Douglas Leonard, president of the Indiana Hospital Association. "There are lots of thoughtful details to make the whole place welcoming to the people they serve."

Eskenazi Hospital is being funded by a mix of private gifts and public money. The bulk of the money comes from a bond issue that Marion County voters approved in 2009, and $150 million the system had put aside in cash.

The hospital also raised tens of millions of dollars in private gifts, including $40 million from commercial real estate developer Sidney Eskanzi and his wife, Lois. The new hospital is named in their honor. A sculpture of the couple sits in the main concourse.

The new hospital will house a Level 1 trauma center (one of two in the state), the region's only adult burn unit, 17 operating rooms, 315 beds, an emergency department with more than 90 treatment rooms and 12 labor and delivery rooms.

Officials say the medical technology and the architecture make the hospital a worthy successor to Wishard, which has served the community by various names since 1859. Some of the artwork from the old building has moved to the new hospital.

"We wanted to make this beautiful and unique," Gutwein said. "But we didn't want to forget our history. We want to look forward while honoring where we came from."