“When we walked in, we knew we were walking into some difficulties,” said Daniel Sellers,” treasurer and chief financial officer for Health and Hospital Corporation of Marion County.

Those “difficulties” added up to a loss of $77 million. 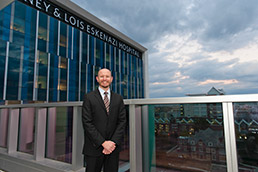 “That loss was putting us on a trajectory where we wouldn’t be in business much longer,” said Sellers, who came on board in 2002, along with a new CEO. “I knew we were stepping into something that required massive changes right away. We spent a lot of time educating leaders that we couldn’t do the same thing we were doing.”

He was surprised at the reaction.

“When we brought them in and explained the numbers, every single person stepped up,” he said. “We are incredibly blessed that everyone understood that we have to figure out how to make what we do work. And people came back with creative ideas.”

One obvious, not-so-creative early step was making sure they were collecting the bills.

“If we wanted to be a going concern—to serve everybody in the community—we had to collect from those who could pay,” Sellers said. “And make sure that we were documenting what we did. It had to be a business that operated within its means.”

That required empowering a value assessment team to go department-by-department looking for areas to increase efficiencies. “We weren’t looking for six-month projects but for quick turnarounds—like spending 50 percent more than we needed to on cups in the patient areas.”

It added up to tens of thousands of dollars in small things but, as important, it created a different attitude among all departments.

On a larger scale, Sellers discovered problems with billing coding.

“When I first started, it was as high as 50 percent of our bills coming back from insurance companies saying there was something wrong. Our folks hadn’t had the training they needed. Now, when a bill is dropped, it’s accurate.”

In the first three years alone, that added up to over $60 million in new collections, not to mention the time savings from not recoding and resending.

All of this was before the November 2009 voter referendum that approved building the new Wishard hospital campus, now formally known as the Sidney & Lois Eskenazi Hospital and Eskenazi Health campus.

“We went through an enormous amount of thinking on that,” he said. “The reality is that it would have been so much more expensive and time-consuming to fix the building. But we had to know that the community was ready to support us in building a new hospital.”

He admits that entering the world of large-scale construction had a steep learning curve.

“The numbers are so big and so staggering it’s hard to keep your arms around it,” he said. “But I spent a lot of time working with finance people to make sure we knew what was going through those numbers.”

A large part of Sellers’ job is finding ways to keep people from coming to his hospital.

“We need to move out into the community closer to where people live,” he said. His scope includes 10 community health centers, Midtown Community Mental Health, the Richard M. Fairbanks Burn Center and more.

The latest addition is an under-construction community health center at 38th Street and Moller Road, which includes not only primary care, but also dental, behavioral health and other services.

“The thing I’m most proud of is the ability we’ve had to turn ourselves around to a point where we could build this facility [Eskenazi] for our community, our employees and our patients,” he said. “It couldn’t have been done if we didn’t focus on our financial requirements. Now it’s about looking to the future and asking, ‘How are we going to make this system really the best system in our community, to move forward prepared for instability and the unknown, and being able to be a part of the future of health care in Marion County?’”

That future involves the Affordable Care Act, which Sellers said, comes at the right time.

“What the Affordable Care Act is attempting to do is say that every person will have some insurance product,” he said. “For a system like ours, where 45 percent are uninsured, to have every one with insurance available makes great sense. Right now, a person comes in as charity care and we have to go through convoluted efforts to fund that. Marian County taxpayers fund it at about $15 million a year through property taxes. But we provide over $150 million in charity care.

“Now we’ll have a better idea how much money we are bringing in. It may not be the full commercial rate, but it becomes easier to measure. And it will be incumbent upon us to live within those means.”•