Choices Inc., which coordinates care for youth involved with multiple government agencies and system providers (child welfare, juvenile justice, special education, mental health), serves about 1,600 youths a day in four states—about 600 of whom are in Indiana.

And thanks to Shannon Van Deman, the not-for-profit has its strongest balance sheet in its 16-year history. 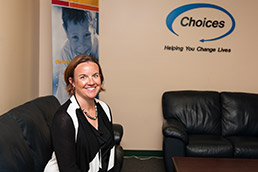 Unlike other financial experts with more steps on their resumes, Van Deman found Choices shortly out of college. Hired as a research analyst in 2003, she quickly earned the moniker “data guru” for her ability to sift though information to come up with recommendations.

“Honestly, it’s not that hard of a thing to do,” she said. “It’s looking at utilization trends. It really was just a matter of doing basic trend analysis and seeing what’s going on over time.”

One of her first projects was figuring out how to pool the existing data and create a feedback mechanism to drive decision-making.

“We operated in a risk-based environment—kind of like an insurance company—getting money per day. I was able to build a financial risk management system within Choices. It stabilized us financially. Instead of taking huge losses and huge gains, we became more predictable.”

She also wanted front-line staff to know how they were affecting the organization, so she created what she calls the CEO Report, with a dashboard for each of them.

“They are each like CEOs of $400,000 companies,” Van Deman said. “The dashboard helps them track where the money is going, how much is going there, and, is there anything better they could be doing?”

The economic downturn, she said, “felt like one letdown after another.” Making up for the loss of key contracts (representing 62 percent of 2011 revenue) meant staff reductions, frozen salaries and benefit changes.

“Fortunately, in 2012, fortunes started to turn. Choices doubled both its revenue and its staff. The Affordable Care Act brings so much opportunity for organizations like Choices. It’s really an exciting time.”

When she joined Choices, it had an Indiana focus, having opened just one replication site in Cincinnati. Since then, it has expanded to Maryland; Washington, D.C.; Louisiana; and soon, Illinois.

Choices, she said, is less concerned with geography and more with alignment.

“What we are looking for are communities ready to serve kids and families in a different way. If the business is there and the funding mechanism is there to support it, that’s where we look. Whether a youth is served in Indiana or Maryland, the experience should be the same.”

Where it differs, she said, is behind the scenes—at the system level. That means “who is giving us the money, how the money is getting to us, if we are at risk. The front-line staff doesn’t—and shouldn’t—know the difference.”

Choices is in a unique position in that all its contracts come from government.

“It’s nice not to have a donor base,” Van Deman said. “I’ve been on not-for-profit boards and it seems like all of the attention is focused on, ‘How do we get more dollars?’ Ours is, ‘How do we use this to better serve?’”•