Home » Union Station gets new scrutiny after spate of repairs

A portion of the brick wall on the south side of Union Station collapsed late last year during a wind storm. The city spent $290,000 on repairs.

The city is spending $600,000 to replace an escalator with an elevator to meet code requirements, and renovate the lobby. 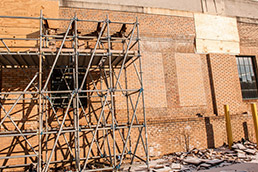 Pieces falling from Union Station have prompted city officials to mount the most comprehensive inspection of the building in several years. (IBJ photo/Eric Learned)

Seeing small projects pile up, city officials have launched an effort to assess the building’s condition with the most thorough inspection in several years.

The study, started by Browning Day Mullins Dierdorf Architects earlier this month, should take 30 to 60 days to complete at a cost to the city of $110,000. CSX, which operates the rail line running through Union Station, separately is gauging the condition of the tracks and is doing its own pricy inspection.

No one from the city is suggesting Union Station is due for a major overhaul. But some basic upkeep and tuck pointing likely is in order, said Adam Thies, director of the city’s Department of Metropolitan Development.

For all its historical significance, the building is getting more expensive for the city to maintain. The tab was $1.7 million in 2012.

The iconic structure that houses the Crowne Plaza Hotel, which is undergoing its own $8 million renovation, actually predates the 20th century. It opened in 1886.

Browning Day’s inspection will attempt to determine areas where repairs might be needed most, architect Greg Jacoby said.

“We felt that we ought to look at the whole structure and see if there’s a bigger problem or if it’s just isolated,” he said.

The inspection will be confined to the rail line portion of the station where tenants are located and will not include what’s known as The Grand Hall, the piece of Union Station that holds the most historical importance.

The building is in no danger of making Indiana Landmarks’ annual list of the state’s most endangered landmarks, mainly because of the city’s ownership and involvement in managing the property, said Mark Dollase, the not-for-profit’s vice president of preservation services.

“Union Station is one of the most important historic landmarks in downtown Indianapolis,” he said.

It was designed by Pittsburgh architect Thomas Rodd in the Richardsonian Romanesque style, an offshoot of Romanesque Revival architecture named after Henry Hobson Richardson, who designed Trinity Church in Boston in the 1870s.

Completed in 1886, Union Station by the turn of that century serviced more than 200 trains a day, forcing the construction of an elevated platform to avoid interfering with street traffic. As travel by train began to wane following World War II, the train station fell into disrepair.

It was placed on the National Register of Historic Places in 1982 and, four years later, was converted to a marketplace containing a collection of restaurants, nightclubs and specialty stores. That’s probably the last time the building has undergone a comprehensive rehab, Dollase said.

The last retail tenant, Hooters, left in 1997. A small collection of offices and not-for-profits occupies the space now, which boasts a healthy 98.7-percent occupancy rate. The Crowne Plaza that anchors the west end is still its largest tenant, occupying almost 154,000 square feet of the 275,000-square-foot station.

Former tenants include the Mexican consulate, a go-kart track and the 21st Century Charter School.

Reclaiming Union Station as a transportation hub, servicing more than a few Amtrak routes, would be ideal, Dollase said.

“With all the conversation going on in the city right now about transit and the need for mass transit, if properly designed and planned,” he said, “Union Station could again be a center for transit in Indianapolis.”

The preferred location is a half-block, city-owned surface parking lot along Washington Street between the City-County Building and Marion County Jail that would serve IndyGo buses and future transit offerings.

Whatever the future holds for Union Station, its importance to downtown is not lost on Browning Day’s Jacoby.

“Very few cities have a building of that quality of architecture,” he said. “It’s a gem that every now and then we need to invest some money in.”•