After a couple of failed attempts, the city of Indianapolis hopes the third time is a charm to develop part of the former Market Square Arena site.

The city in July selected local developer Flaherty & Collins Properties’ proposal to build an $81 million, 28-story skyscraper in what would be the tallest new downtown development since the 34-story JW Marriott hotel opened in 2011. 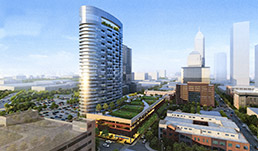 The city has agreed to contribute $17.8 million by investing property taxes generated from the project back into the development, which would break ground in the spring and be completed by late 2015.

About 500 parking spaces and 43,000 square feet of ground-floor retail space would be included. Flaherty & Collins said it prefers that a specialty grocer occupy the space and is pursuing Whole Foods as a tenant.

The building would feature a rooftop pool, a green sky window on the tower roof, and apartments with floor-to-ceiling windows and panoramic views of the city.

The architect is the Chicago office of Baltimore-based RTKL.

Attempts to redevelop the property under former Mayor Bart Peterson failed in 2004 and 2007. City officials decided to offer only the northern half of the arena site this time around, in hopes a first phase would help drive demand for a second.

The roughly 2-acre site has served as surface parking since the arena’s implosion in 2001.