Founded in the mid-1970s as the city’s litter-abatement agency, the not-for-profit Keep Indianapolis Beautiful has grown along with Indianapolis. Now it’s working to strengthen its relationship with volunteers and diversify its funding stream as it aims to increase its impact.

“We hope to create more attachment to KIB and the work we’re doing,” President David Forsell said of the additions to the full-time staff of about 20. “We want our work to have an enduring impact. If it’s just KIB’s idea, it’s not going to go well.” 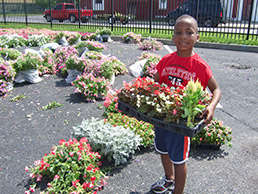 KIB doesn’t do much alone. Its 37,000 volunteers pitch in on about 500 projects each year, Forsell said, tackling everything from beautifying neighborhoods to painting murals to building pocket parks.

About 80 seasonal employees—college students who make up the group’s “youth tree team”—plant and maintain thousands of trees for seven weeks each summer.

And more than 1,000 individual donors contribute what they can (the average gift is about $50) to help fund KIB’s $3.5 million annual budget.

Still, about 75 percent of the organization’s revenue comes from a much smaller group of supporters, including the city of Indianapolis and corporate partners including Eli Lilly and Co.

“It’s awesome when private business or government comes in and funds something at a very high level,” KIB board Chairman John Andrews said. “But you start to get nervous, because it can go away at any time. We definitely need to make sure we have different streams of income.”

That has been the board’s goal for several years, he said, but progress so far has been incremental. Agency leaders hope adding front-office firepower gives the bottom line a noticeable boost in 2014.

The organization’s biggest fundraising hurdle may be its origins as a city agency, said local fundraising consultant Jessica White.

“People understand the need for the organization and are proud to have it in our city, but they probably think it’s all government-funded,” she said. “It’s hard when you move out on your own, but you’ve got to get your story out.”

KIB already has an enviable list of prospective donors who are familiar with the agency’s work: tens of thousands of volunteers.

“A strong volunteer program is a good basis for a strong giving program,” White said.

Which is why the organization also is building capacity outside its fundraising office. The volunteer coordinator will work to keep volunteers engaged beyond episodic project work, for example, and the community engagement director will build partnerships with other groups to make projects as meaningful as possible.

Indianapolis-based Lilly tapped KIB to help with its Global Day of Service event several years ago for just that reason. Last year, the drugmaker’s annual employee volunteer-fest spurred a citywide “Indy Do Day.”

KIB also is a partner in Indianapolis’ Reconnecting to Our Waterways initiative, an effort to use six city waterways to attract investment and improve the neighborhoods that surround them, and may help Indianapolis Downtown Inc. attack its five-year downtown-improvement plan, dubbed Velocity.

And KIB is working on a pilot program with Citizens Energy, installing “green infrastructure” to manage and store storm water in a five-block-by-seven-block area near West 10th Street and Holt Road. The idea is to plant trees and deep-rooted foliage to filter pollutants, saving ratepayers money.

But projects don’t have to be massive to be meaningful.

Last year, Indianapolis-based Ryan Fire Protection asked KIB to put about a dozen of its 150 employees to work for a day as part of a corporate effort to get involved with community organizations. They turned an unused parcel of land in Fountain Square into a plant-filled oasis.

The Lilly partnership has opened doors for KIB with other businesses and their employees, said board chairman Andrews, and now it’s up to the organization to turn that interest into income.

“We would love to see more individual giving, but that’s one of those things that just takes time,” he said. “It’s a massive undertaking.”•