A historic but vacant synagogue on the near-north side of Indianapolis has been thrown a lifeline by Indiana Landmarks, which plans to renovate the building in hopes of finding a tenant.

The preservationist group paid $50,000 to rescue the temple at 3359 N. Ruckle St., near East 34th Street and Park Avenue. Most pressing on the to-do list is a roof replacement, which will be paid for with a $100,000 city grant to the Mapleton-Fall Creek Community Development Corp.

“One of the special features of the sanctuary is very detailed plasterwork,” said Mark Dollase, Indiana Landmarks’ vice president of preservation services. “And that unfortunately is being decayed and damaged by the water infiltration.” 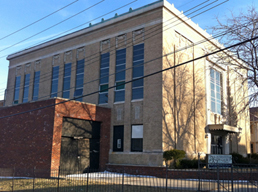 Two Jewish and three Christian congregations worshipped at the synagogue at different times until it was vacated about 10 years ago. (IBJ Photo)

The imposing structure tucked in a residential neighborhood has a storied past. It was designed by the local architectural firm Vonnegut Bohn and Mueller, whose work included city landmarks such as the Athenaeum and downtown L.S. Ayres building. The firm was founded by esteemed author Kurt Vonnegut’s grandfather, Bernard Vonnegut, and led by his father, Kurt Vonnegut Sr., when the Beth-El congregation built the temple in 1925.

Beth-El worshipped there until 1958, when it moved north to its present location on West 70th Street. Another Jewish congregation, B’nai Torah, occupied the building on Ruckle Street until 1968, when it too moved north, to West 64th Street and Hoover Road.

Three Christian congregations inhabited the structure at different times, until about 10 years ago. The property ultimately ended up on the Marion County tax-sale list of delinquent properties before Indiana Landmarks convinced city officials to pull it and allow the not-for-profit to buy the building.

Jewish iconography remains in the second-floor sanctuary, including an elaborate screen and chandeliers that incorporate the Star of David. The space also boasts a barrel-vaulted ceiling with plasterwork that features stylized floral Art Deco motifs.

The two-story structure totals about 15,000 square feet and could be reused as a Jewish Heritage Museum, a restaurant, a daycare facility or for a preservation-centered job-training program, said Dollase of potential uses that have been suggested.

Indiana Landmarks plans to retain ownership of the building for the rest of the year before handing the keys to a newly formed not-for-profit, Temple Heritage Center Inc., which will oversee the synagogue in its new creation.

Beth-El member and local businessman Isaiah Kuperstein, who owns the local Double 8 Foods chain, has been named president of the not-for-profit. One of his four stores is located across from the former synagogue, on Fairfield Avenue, and he’s also a director of the Mapleton-Fall Creek CDC.

“It has a tremendous significance for the Jewish community as well as the neighborhood,” he said. “This is not a building that should be destroyed; we should save it.”

Kuperstein’s group has met once with neighborhood and city officials, and will continue to have discussions with interested parties to determine the best use for the building. Two sessions open to the public are set for the spring.

In the meantime, Indiana Landmarks is accepting donations for the project.

“I think it’s a really significant building, primarily for its representation of the city’s Jewish heritage,” Dollase said. “It’s the oldest standing synagogue in the city.”