The cash-strapped Carmel Redevelopment Commission has spent more than $6 million since 2009 “responding to, defending and settling” legal claims from contractors involved in construction of the city’s Palladium concert hall, according to filings in Hamilton Superior Court—and the meter is still running.

Commission members last month approved a $575,000 settlement with Bloomington-based Crider & Crider Inc., a subcontractor that filed suit three years ago alleging it had not been paid for excavation work it did in 2008. 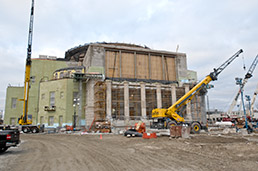 The Palladium concert hall in Carmel opened in 2011 at a cost of $119 million. (IBJ file photo)

But that deal does not resolve a related dispute with Hagerman Construction Corp., the concrete contractor that hired Crider for the project. Fishers-based Hagerman says it’s still owed more than $650,000 from the CRC (plus interest), which the CRC denies.

“Any amount owed by CRC to the plaintiff is offset, in whole or in part, by the amount owed by Hagerman to CRC for poor workmanship or other failures … in performing its obligations,” commission attorneys wrote in response to the allegations.

And then there’s the ongoing battle with Michigan-based Steel Supply & Engineering Co., which the CRC is suing over Palladium roof defects that halted construction for three months in 2009 amid concerns about a possible structural collapse.

The delay set off a chain reaction of scheduling problems that disrupted the project, CRC attorneys say in court filings, leading to a flurry of contractor claims for lost time and other damages. The estimated cost to the CRC at the time: $6.1 million.

Steel Supply, meanwhile, says it’s not to blame for the faulty design that resulted in a rip in the structural steel web supporting the venue’s domed roof. It maintains that contract documents and industry standards make that the responsibility of the project’s engineer of record, which is not a defendant in the lawsuit.

Its attorneys have asked Judge Steve Nation to rule on the responsibility question now, potentially avoiding a bench trial scheduled for late this year. A hearing on the matter has been set for May 5.

Whoever is at fault, neither party is disputing the fact that the roof-support system’s design was flawed. It has quite a load to bear: The 110-foot dome is formed by a steel frame covered with 12-inch-thick concrete planks, court records show.

The CRC hired Houston-based structural engineering firm Walter P. Moore to identify the technical deficiencies and recommend a fix, and said in a December court filing that the company also found additional problems with bolts in eight connection points and “various additional connections that are defective and which will require remediation.”

Although the CRC’s roof lawsuit did not target engineer-of-record Lynch Harrison & Brumleve Inc., the commission reserved the right to pursue related claims against the Indianapolis-based firm in the future.

It had a similar “tolling agreement” with project manager Shiel Sexton Corp., but in November struck a deal that calls for letting the Indianapolis contractor off the hook in exchange for the company’s forgiving more than $200,000 in promissory notes from the CRC and the Palladium.

The settlement also calls for Shiel Sexton to provide up to 240 hours of project-management services during the investigation and remediation process at no cost; any additional services will trigger a $167.50-per-hour charge.

The deal is a way to avoid the expense of litigation and “really, to facilitate the continued professional relationship” with Shiel Sexton while the Palladium roof is repaired, City Attorney Doug Haney told commission members Nov. 21.

Buried in the fine print is an acknowledgment that the hold-harmless agreement does not apply to any potential claims tied to the Crider & Crider litigation.

Crider sued Hagerman and the CRC for $747,342, the amount it said it still was owed after an $808,768 payment in October 2009. The excavation project was more costly and time-consuming than expected, the lawsuit says, because a stockpile of fill dirt Crider was supposed to use was not suitable for its intended purpose.

Hagerman laid the blame with the CRC, which it said had overseen a mass excavation on the site under a separate deal with another contractor. And since that work delayed the start of Hagerman’s concrete project, the company also is seeking reimbursement for “significant additional costs” incurred to meet construction deadlines.

The CRC responded in court filings with the criticism of Hagerman’s work and an assertion that nothing else was owed: “CRC has made all payments … pursuant to its agreement with Hagerman.”

Mayor Jim Brainard, who has participated in settlement talks since the resignation of CRC Executive Director Les Olds last year, called the Crider deal “a fair outcome given that the work was completed.”

And the $575,000 settlement—payable in three installments by the end of next year—is a bargain compared to the $1 million-plus value of Crider’s claim and accrued interest.

Hagerman is seeking about the same amount. Brainard said that claim has not been settled “because we feel the monetary request is inflated.” He declined further comment on the pending litigation.

Hagerman Group Chairman Jeff Hagerman is hopeful a resolution is near despite years of negotiations that have gone nowhere.

“It has been extremely disappointing we have not been able to resolve issues that are now over three years old, let alone receive final payment for work completed,” he wrote in an email to IBJ.

That’s not for lack of trying. City Councilors Rick Sharp and Luci Snyder—immediate past president and finance committee chairwoman, respectively—went to the mayor early this year with an offer: Settle the Crider/Hagerman litigation for a total of $1 million, and the council would use money from the city’s Rainy Day Fund to pay the tab.

“We thought it was in the best interests of the city as a whole that these lawsuits be put behind us,” Sharp said. Allowing the litigation to drag on “is creating a bad image of Carmel in the construction community. And it’s quite a drain on the redevelopment commission. The only ones benefiting are the attorneys.”

The mayor “expressed appreciation” but declined the offer, Sharp said, even though members of both the council and the redevelopment commission privately supported the move.

Hagerman hasn’t given up. “We are hopeful the mayor will accept the terms of this negotiated settlement recommended by his team,” he wrote in the email.

CRC Finance Committee Chairman Dave Bowers told the council the commission will have to “rearrange some things” in its 2014 and 2015 budgets to accommodate the payments.

In an email, Brainard said the CRC has "retainage" funds set aside to pay "what we believed it owed," so it's not necessary to tap the Rainy Day Fund.

The commission is still adjusting to the new reality of pinching pennies after borrowing $240 million over the past decade to support redevelopment projects like the Center for the Performing Arts, Carmel City Center and the Arts & Design District. Revenue from the city’s tax-increment financing districts pay the bills.

Sharp worries that obligations like the Crider settlement will jeopardize its ongoing redevelopment work, given the CRC’s tight finances.

“Expenses already are barely covered by the increment,” he said. “If anything goes wrong with the CRC, the city is going to have to step in and bail them out.”•