This year, the 11 millionth Indianapolis Indians fan is expected to walk through the Victory Field turnstile.

The facility looks barely a day older than when it opened almost 18 years ago. And the Indians can take a lot of credit for that. The AAA minor-league baseball team has poured tens of millions of dollars into Victory Field while the city has spent hardly a dime. 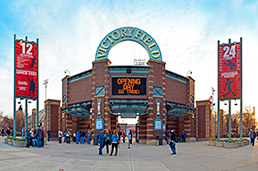 The Indianapolis Indians paid for a major renovation of Victory Field’s center-field ticket office in 2008.  (Photo courtesy of Mark Dickhaus)

That point is likely to come up as the Indians and the city’s Capital Improvement Board begin lease negotiations. The current lease expires March 31, 2016, and the two sides have begun preliminary discussions on a new deal. The Indians to date have not asked for the kind of subsidies enjoyed by the city’s other local sports franchises—support that could dramatically improve profitability and shareholder returns.

This much is known: Since the facility opened July 11, 1996, the Indians have paid almost $6 million for capital improvements—including two electronic scoreboards, an outdoor bar and restaurant, expansion and improvements to the facility’s gift shops and ticket offices.

Most recently, the team spent $911,000 to improve Victory Field: $636,000 for a new wireless communications and WiFi system, and $275,000 to expand and improve the venue’s third-baseline gift shop and main-level ticket office. Those enhancements will debut at this year’s season opener April 10.

Per the team’s lease agreement with CIB, the franchise also pays all operational expenses. Coupled with capital improvements, the Indians have spent well north of $50 million on the ballpark since it opened.

In one of this professional sports market’s rare agreements, the Indians get no tax subsidies and pay the city $500,000 annually to lease the facility on the western edge of downtown.

The Indians deal is in stark contrast to those of the Indiana Pacers and Indianapolis Colts, which have each received multimillion-dollar annual subsidies from the city in recent years. The Pacers pay $1 a year to lease Bankers Life Fieldhouse; the Colts pay $250,000 to play in Lucas Oil Stadium.

About all the city has invested in Victory Field is the land it sits on and $9 million to help build it. The Indians paid the other half of the $18 million construction cost.

On top of all that, the Indians pay a ticket tax that benefits their richer local professional sports brethren.

Thus far, though, Indians executives have rarely—if ever—complained about their arrangement.

Indians executives became fed up with the city’s slow response on maintenance and upgrades at the team’s former home, Bush Stadium.

“There seemed to be an inordinate amount of red tape in just getting simple things done,” Schumacher said, tasks like “painting and even changing light bulbs.”

So when the lease was drafted for Victory Field, the Indians asked to be in charge of the facility.

For major capital improvements, the Indians must get CIB approval, but the process is streamlined from the old days, when city parks department staffers often coordinated the work.

For a professional team with a relatively small revenue stream—about $10 million to $11 million annually—the team has spent freely on improving a facility it doesn’t own.

Along the way, the team also has spent hundreds of thousands of dollars to maintain and upgrade the field, add a picnic area, and make improvements to the concourse area and both gift shops.

All those improvements have kept Victory Field “one of the absolute best in all of baseball,” said Will Lingo, editorial director for specialty publication Baseball America. 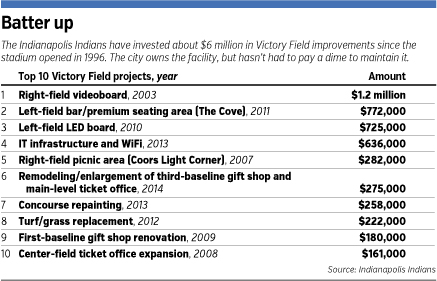 Baseball America and Sports Illustrated have voted Victory Field the best ballpark in the United States in recent years.

While the Indians are certainly fiscally prudent by professional sports standards, team executives said the decision to spend money on their home venue has been easy.

“We know the ballpark is a big part of the fans’ experience and we want to keep it as pristine as the day we opened here,” said Indians General Manager Cal Burleson.

Looking out for investors

But Mark Foster, portfolio manager and chief investment officer of Columbus, Ind.-based investment firm Kirr Marbach & Co., said the Indians organization, a publicly traded company, should keep one other constituency high on its priority list. The Indians are traded in the NASDAQ Pink Sheets.

“Like any other public company, they have to answer to their stockholders,” Foster said. “And the economics of the equation would tell you if they can get the government to pay at least part of their expenses, it would be better for their stockholders. The other sports operators in town certainly have their hands out.”

Since Lucas Oil Stadium opened in 2008, the Indianapolis Colts have received a $3.5 million annual subsidy from the city in addition to having all game-day expenses paid.

In a July 2010 contract, CIB agreed to give the Pacers $33.5 million over three basketball seasons to offset losses from operating Bankers Life Fieldhouse. In December 2012, CIB extended the contract for another year and gave the Pacers an additional $10 million.

In 2013, the Indianapolis Motor Speedway secured $100 million in tax revenue over 20 years from the state to make upgrades.

“With what’s going on in Indianapolis, you could certainly make a fairness argument,” Foster said.

If the Indians could merely get CIB to waive their lease, they could grow profit 30 percent to 50 percent, which would greatly increase stockholder dividends. In recent years, the Indians have posted an annual profit of around $1 million to $1.5 million.

Why city may not pay

There are several reasons the city might refuse to give the Indians any financial breaks.

“First, they don’t have the economic impact teams like the Pacers and Colts have on the city and secondly, they couldn’t argue they have need of financial aid,” Foster said.

The Indians, which seem to be somewhat recession-proof, have made a profit every year dating back to 1975.

“There’s one more big reason,” Foster added. “They don’t pose much of a flight risk. The Pacers and Colts can always threaten to move. I’m not sure the Indians have that card to play.”

“I think that there are different business models for the Indians, Colts and Pacers, so I don’t know if it’s apples to apples,” Lathrop said. “Plus, I’m in the middle of negotiations so I wouldn’t say what’s reasonable or unreasonable in terms of what [the Indians] might ask for.”

There’s one thing all professional sports teams have in common.

“All professional teams are looking to maximize profitability,” Foster said. “That’s what these stadium deals are about. And that’s no different no matter what league you play in.”•