The new owner of a historic office building at the foot of Massachusetts Avenue wants to make it bigger by constructing a four-story addition with ground-level retail on an adjacent surface lot. 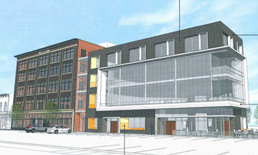 Gershman Partners now has filed with the Indianapolis Historic Preservation Commission to build the addition on the northeast side of the Marott. IHPC is set to hear the proposal Wednesday at a preliminary review, where members provide feedback on a project but don’t take action.

The developer hopes to break ground in the spring on the roughly 30,000-square-foot building, which would feature 7,500 square feet of retail space.

“We like the combination of new and old and really think it’s a prime location within the downtown market, and specifically the Mass Ave corridor,” he said.

A local condominium developer who co-owns 3 Mass condos just south of the Marott thinks the office addition will be well-received.

“I would expect a high-quality product from Gershman that would be well-designed and very tenant friendly,” said Todd Maurer, a principal at Newmark Knight Frank Halakar.

Maurer was part of a group that earlier this month sold the 36-story Regions Tower. Also part of the group were his father, Michael S. Maurer, local businessman Robert Schloss and Pittsburgh-based McKnight Group,

New York City-based The Nightingale Group LLC bought the 662,000-square-foot building for about $100 a square foot, or $65 million.

Regions Tower, also known as One Indiana Square, is nearly 70-percent occupied and is one of several downtown office buildings where occupancy has struggled.

Despite the high amount of downtown office space available, Maurer thinks the addition to the Marott Center will be attractive to potential tenants.

“The vacancy is really in the towers; the unique properties aren’t experiencing that,” he said. “I would say that it would be a very successful project.”

George Rubin, now retired, and Elliott Levin, principals of the Rubin & Levin PC law firm, had owned the building since 1984.

The firm is located in the 52,000-square-foot Marott Center, 342 Massachusetts Ave. Other tenants are a Walgreens health clinic and an F.C. Tucker Co. office.

The center, which sits on the same block as Stout’s Shoes, was built in 1906 as one of the first multi-level department stores in Indiana. Restored in 1985 by Rubin and Levin, it is listed on the National Register of Historic Places.

Marott Center is 90-percent occupied. Renovations are in the works, including minor modifications to the façade, that are aimed at bringing the building to full occupancy, Gershman said.

“We don’t have any deals to announce yet, but we’re looking to make changes to that building,” he said.

The architect for the Marott addition is locally based Axis Architecture + Interiors.

One of the firm’s more notable projects is IndyGo’s $20 million transit hub, which is set to be built on a half-block surface parking lot on East Washington Street south of the City-County Building. City leaders ceremonially broke ground on the center Sept. 25.

Axis also designed the new downtown fire station that is set to be built as part of an ambitious real estate swap. The Indianapolis Fire Department plans to move its offices to the building currently occupied by the American Red Cross of Greater Indianapolis at 441 E. 10th St. The department would construct the Axis-designed fire station on the same property, which is about four blocks north of the existing IFD complex at 555 N. New Jersey St.

That would make way for construction of a $43 million apartment and retail development at the intersection of New Jersey and Massachusetts Avenue, where IFD’s headquarters now stands. That site is about two blocks northeast of the Marott Center.