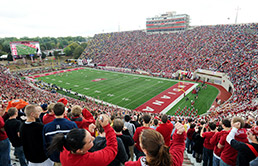 The policy is effective immediately, meaning all current Big Ten athletic scholarships are now guaranteed, said Chad Hawley, the Big Ten’s associate commissioner of compliance. The 14 universities in the Big Ten provide about $200 million in direct financial aid to almost 9,500 athletes in 42 sports.

“If you came into the Big Ten as a scholarship athlete, that scholarship will not be taken away from you in accordance with what’s being guaranteed here,” Hawley said in a telephone interview.

The new policy, which applies specifically to undergraduate degrees, states that scholarships won’t be reduced or canceled as long as the athlete remains “in good standing” with the school and athletic department. If an athlete leaves school for a “bona fide reason” he or she will be allowed to return with the assistance of a scholarship.

Hawley said the language of the policy was intentionally flexible so that individual institutions could define the terms in accordance with their own standards.

Hawley said that an athlete won’t lose a scholarship if he or she leaves school early to pursue a professional sports career, or suffers a career-ending injury. He said the “in good standing” wording is meant to imply that any athletes making academic progress, following team rules and having a positive impact on campus society are covered.

The NCAA in August granted partial autonomy to its five richest and highest-profile leagues, including the Big Ten. The following day, a U.S. district judge ruled that the NCAA’s structure creates a cartel that violates antitrust laws by limiting what schools can offer athletes. The NCAA said it will appeal the decision, which would lead to players being paid for their names, images and likeness.

Last week Indiana University, a Big Ten member, quantified the total value of a four-year athletic scholarship, including services and goods above traditional tuition, fees, books, room and board. For an out-of-state athlete, the total was $240,274; it was $135,766 for an in-state athlete.

The NCAA in 2011 passed legislation allowing universities to offer multiyear scholarships as opposed to the standard one- year renewable, though many schools have been slow or reluctant to do so.

Individual schools, including the University of Southern California, have offered four-year scholarships to its football and basketball teams. The Chronicle of Higher Education said in a 2013 report that 35 of 56 schools surveyed said some offered multiyear scholarships, though they comprised less than 10 percent of all athletic scholarships.