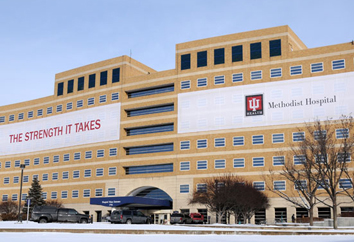 Key parts of Indiana University Health’s business bounced back in the third quarter, helping the hospital system boost its revenue and profit.

Those increases, as well as a 4-percent boost in emergency room visits, offset continuing declines for inpatient visits and inpatient surgeries, which each declined about 3 percent.

All those categories had been either flat or down the previous four quarters, as patients in Indiana and nationwide significantly slowed their use of health care services.

While IU Health is the first of the major Indianapolis-based hospital systems to report third-quarter financial results, other hospital chains around the country have also posted improved results this month.

The turn of fortunes gave a big boost to IU Health’s bottom line. It pulled in profit of $175.6 million, even after excluding $22 million in gains from entities in which IU Health has a noncontrolling investment stake.

That was nearly four times as much profit as IU Health recorded in the third quarter a year ago, when it tallied $44.3 million in profit, excluding certain special items that were not repeated this year.

IU Health’s bottom line benefited greatly from smaller personnel costs. As of Sept. 30, it employed roughly 2,000 fewer full-time-equivalent employees than it did a year ago. About 80 percent of those staff reductions have occurred at IU Health’s downtown campuses—Methodist, University and Riley Hospital for Children.

Revenue from operations totaled $1.41 billion in the quarter, a 13.6-percent rise from the same quarter last year.