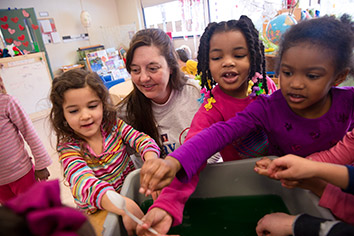 Indianapolis appears to be on its way to launching a city preschool program to serve the city’s poorest children.

After a bumpy three-month ride, a bipartisan City-County Council committee on Tuesday night tentatively approved a $40 million plan — similar to the one first proposed over the summer by Mayor Greg Ballard — to place between 700 and 1,300 three- and four-year-olds in high-quality preschool programs starting in 2016. The proposal now goes to the full council for a final vote.

The plan’s unanimous approval follows months of disagreement followed by delicate negotiations between top Democrats and the Republican mayor’s office to reach a deal. Democrats first punted Ballard’s plan after disagreeing with his method of funding it by eliminating the local homestead tax credit, which they said would disproportionately cost public schools.

“Everyone wins,” Councilman John Barth said. “It’s really a high-quality program that everyone has put together. There’s an increasing number of our city’s children that live in poverty. Giving families a pathway to success is a key component of how you help get families out of poverty.”

The approved plan is slightly smaller than what Ballard first had in mind. Under the compromise, three- and four-year-olds will be able to take advantage of the program — not just four-year-olds — and a council committee would have oversight over it. The new program also will prioritize the poorest children, starting with families of four earning up to $30,290 getting the first spaces in line.

It is expected that $10 million in public funds would be used to pay for the program if it’s passed by the full council. The funding of the program was not approved Tuesday night.

City dollars proposed to be used to support the new plan include $1.7 million that was saved through a change to the homestead tax credit program, higher interest expected from city investments, and money saved from the mayor’s education office budget if it decides separately to assess a 1-percent fee to charter schools. An additional $10 million would come from corporate donations, with the rest raised through other philanthropic sources.

More than two dozen people waited nearly four hours to show their support for the plan at the lengthy committee meeting.

Among them was Rob Smith, president of Lilly Foundation, who said the city’s investment in preschool makes good business sense because it will lead to better educational opportunities for the city’s children and more prosperous citizens.

“We don’t have a particularly good track record of people breaking the cycle of poverty,” Smith said. “We have no more important priority than improving the quality of education that’s received by all our children. Even in the face of many competing priorities … there’s no better investment the city of Indianapolis can make than investing in high-quality early childhood education. We’re excited about the opportunity to participate.”

LaNier Echols, a Carpe Diem Meridian charter school dean who was recently elected to the Indianapolis Public School Board, said a city preschool plan will help keep kids in school and out of jail. She said she encountered a mother on the campaign trail this fall who said her son was lucky to get a spot in a high-quality preschool program this fall.

“It is our duty to equip (students) with the necessary skills for them to prosper,” Echols said. “A child’s education should not be left to luck. The future of our city, state and country depends on it.”

The plan to create a fund and establish a preschool program was approved unanimously, but some city officials still expressed concerns about how the program would be funded.

Republican Councilman Robert Lutz, who said he voted for the plan after a “severe arm twisting” from Ballard, said the plan sounds like it will pay dividends down the road, but he might vote no once it reaches the full council if any funds will be diverted from hiring police officers.

“I’m a supporter of quality preschool,” Lutz said, “but I want to be very cautious that we are shifting no funds that were dedicated to the hiring of police officers. These children getting into these programs have to be safe on the streets. I promised (to vote yes) … because this is an important issue that does need to be debated.”

Councilman Vop Osili, who voted in favor of the plan, said once a city program is approved he hopes that the onus is put on the state to expand its preschool pilot program. Gov. Mike Pence pushed the legislature to approve a five-county pilot earlier this year.

“This really is not the role of the city,” Osili said. “While we can do it, we should do it. But we most also push and prod our state to step up and do its responsibility as well. That is essential. We’re not done.”