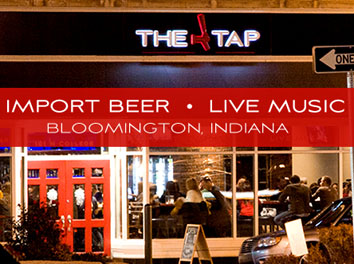 The developer of the Pulliam Square mixed-use real estate project under way downtown on the site of the former Indianapolis Star headquarters property has signed its first lease.

The Tap, a tavern and restaurant that carries a massive menu of beers, has agreed to take 6,870 square feet at the corner of New York and Delaware streets, where the first phase of the project is under construction, said Dennis Dye, a principal of project developer TWG Development LLC. 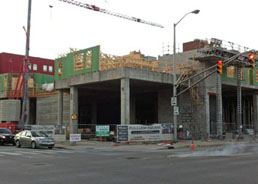 Pulliam Square is under construction at the corner of New York and Delaware streets. (IBJ Photo/Scott Olson)

Recent Indiana University graduates might be familiar with The Tap. Owner Nathan Finney opened the tavern in Bloomington at 101 N. College Ave. in late 2012 and now is bringing his concept to Indianapolis.

The Tap carries 50 rotating tap beers and about 400 bottled brews. It also began brewing its own beer about six weeks ago. In addition to beer, the restaurant offers a full menu of sandwiches, burgers, tacos, pizzas, salads and appetizers.

The Indianapolis location could open by next fall, Dye said.

About 7,000 square feet at Pulliam Square remains available for lease, on which TWG is receiving “a fair amount of activity,” Dye said.

CVS had planned to open a store at the site but scrapped the plans. In October 2013, a city zoning board approved TWG’s request for a drugstore drive-through presumably for a CVS based on the look of an architect’s rendering.

But the chain instead signed a short-term lease extension for its store in the BMO Harris building at 105 E. Ohio St. with plans to open a larger, downtown store sometime in the future, retail brokers said.

TWG’s plans for the former Star property call for up to 500 apartments in three buildings. Two of those buildings already exist and the other, which will include the retail space, is under construction near the parking garage at the corner of Delaware and New York streets. That building will include 135 apartments.

TWG paid $11.25 million for the 190,000-square-foot Star property at 307 N. Pennsylvania St. and its 500-space parking garage. The Star in late September moved into part of the former Nordstrom space at Circle Centre mall.