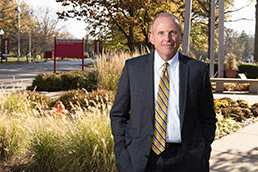 Working at an academic institution known primarily for its engineering program, Robert Coons has learned to make sure he has a good, logical argument for everything.

“Logic is what carries the day here,” said the senior vice president and chief administrative officer for Rose-Hulman Institute of Technology. “If you have a solid argument and are willing to be questioned by people who are brilliant, you can be successful. But not everyone in our field is comfortable with that.”

Coons’ success is clear. Joining the Terre Haute institution in 1989 after serving as controller and, later, vice president for administration and finance at St. Andrews Presbyterian College in North Carolina, he rose from controller to vice president to chief administrative officer. He even did time as interim president after the 2012 passing of President Matt Branam.

The loss of Branam was just one of many transitions that have increased the challenge for Coons and his team at Rose-Hulman.

“I make sure the institution is as sound financially as it can be,” he said. “Looking at our balance sheet and our credit ratings, we’re as financially solid as we’ve ever been.”

Coons’ stewardship, both as the chief money person and his stint in the No. 1 slot, has helped Rose-Hulman to be ranked by U.S. News & World Report for 16 years as the top engineering college in the country whose highest degree option is a master’s. Attended by 2,250 students from 48 states and 21 countries, it averaged 5.1 job offers per student in 2014 with an average starting salary of $68,000 (with the highest hitting $110,000). For its most recent career fair, nearly 250 companies showed up to recruit.

“We recruit students from the top of their classes,” he said. “For many, it’s the first time they’ve ever been in the bottom half of their class. It’s a bit of a shock the first quarter or two when they get a C. They’ve never had a C.”

Keeping tuition in check is a major project for Coons.

“We’re concerned about sticker price,” he said. “But we’re much more concerned with net price. [On average, financial aid discounts about 43 percent of tuition costs.] Our goal is to increase the endowment and we’re ramping up fundraising. We’re still a fairly lean organization, but with a 14-to-1 student/faculty ratio, it’s a costly enterprise.”

It’s also a rewarding one for Coons.

“I like the small-school environment,” he said. “I like a fairly flat organization without lots of bureaucracy. And I really enjoy being on a college campus working with 18- to 22-year-olds, seeing them progress. It keeps you young and well-informed.”