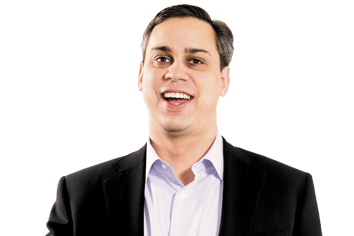 Embracing the unknown: Promoted six times in eight years, Vijay Mehta now leads a team of more than 70 at Experian, best known for providing credit scores. One of the youngest execs at the $4.8 billion company and an entrepreneur himself, Mehta believes strongly in understanding and accepting risk. “The best way to grow is to try new things and never settle for the status quo,” he said. “I’m always looking for new opportunities, new ideas, new technology—anything to take me outside the norm.” That includes recent involvement with a mobile dental company in Las Vegas. Being an effective entrepreneur, he said, requires the ability to deal with ambiguity and the unknown, even though, he added, “It can be scary.”

Translating tech: After attending high schools in three countries, Mehta attended the University of California-Santa Barbara, then was recruited to Indianapolis by Newcourt Financial. The job, he said, “wasn’t very exciting, but it gave me good exposure to corporate America.” Later, back and forthing between jobs in Indy and California, Mehta also focused on writing tech articles and public speaking, taking complicated subject matter and turning it into something a layperson can understand.

Frequent flying: After a stint with Sallie Mae, Mehta worked as an independent consultant, which is how he got his foot in the door at Experian. A full-time offer followed. “The opportunity,” he said, “was really fantastic to work with customers globally.” That translated to up to 200,000 miles of air travel per year. “I’ve cut back a lot,” he said, “but I did hit my million-mile mark.”

Like father: Mehta’s father, an international banking executive, taught him to be authentic and to value people. “It’s more than the output that people provide,” Mehta said. “What people do at the office isn’t what defines them. It’s about understanding and engaging on a much more personal level.” His give-backs include work with Building Tomorrow, Timmy Global Health and Exodus Refugee Immigration. “I wanted to find things that fit my general passions,” he said. For himself, those passions include snowboarding, which he recently indulged on a trip to Lake Tahoe.•