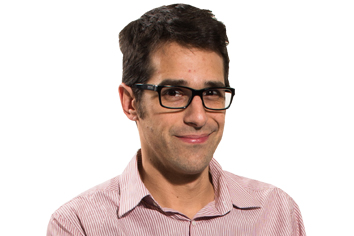 Becoming a professional writer: “It wasn’t really a decision,” Ben Winters said. “At a certain point, I had eliminated all other possibilities. I was always writing and never started another career and never went to graduate school. By the time I was too old to start something new, I was already starting to do well as a writer.”

Three’s the charm: After writing a pair of parody novels (“Sense and Sensibility and Sea Monsters” and “Android Karenina”), Winters pitched his editor on a detective story set at a time when the world is about to end. The editor not only bought the idea, but suggested it be a trilogy. “That gave me the opportunity to make it richer thematically and also to tell three distinct mystery stories and fully develop each.” The resulting books, “The Last Policeman,” “Countdown City” and “World of Trouble,” earned positive reviews, with the first winning an Edgar Award from the Mystery Writers of America.

The road to Indy: Winters moved to Indianapolis when his wife, a law professor, took a job at Indiana University Robert H. McKinney School of Law—just as they had moved to Boston when she landed a job there. “We have a healthy, symbiotic relationship,” he said. “I can write anywhere and she gets health insurance and has a stable income.”

The benefit of a theatrical background: Before his success as a novelist, Winters wrote plays and performed improvisation. “I learned a lot about character,” he said. “You have to have a character with a unique voice, unique needs and unique wants. That’s how conflicts are created. You also learn to collaborate. As a fiction writer, if you can’t take feedback from your editor and the public, you’re doomed.”

Not a hobby: “People don’t always recognize that there’s such a thing as a working writer,” he said. “I’m not a household name, but neither am I a starving artist. There’s an absence in the cultural imagination for that thing in between. That’s a real shame. It makes people not shoot for realistic careers.”

Next up: “Underground Airlines,” an alternative history mystery set in a world where the U.S. Civil War never occurred, is due out in 2016.•