After 2014, a year in which the city’s criminal homicide rate was the highest it’s been in eight years, Indianapolis needs all the help it can get to fight violent crime.

The 135 murders don’t even tell the whole story. More than 400 non-fatal shootings happened last year, and that doesn’t count the number of violent acts that didn’t involve a gun. It takes more than a police force to battle that level of dysfunction.

One program that’s doing its part is Eskenazi Health’s Prescription for Hope, a 6-year-old initiative that helps victims of violent crime make positive changes in their lives and avoid becoming victims again. 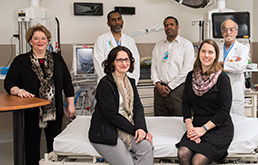 The Prescription for Hope team offers victims of violence comprehensive support to turn their lives around. (IBJ Photo/ Eric Learned)

Prescription for Hope, which is also open to the families of victims, is making a difference. In three years, Eskenazi saw the number of patients returning to the hospital with violent injuries fall from 30.8 percent to 4.6 percent, said Marion County Prosecutor Terry Curry.

Because of numbers like those—and the difference the program is making in the lives of the people it’s helping—Prescription for Hope is this year’s Health Care Heroes winner in the Community Achievement in Health Care category.

Curry, who nominated Prescription for Hope, noted that trauma from gunshots, stab wounds and assaults is a robust predictor of future violent injury, citing a 2007 study published in the Journal of the American College of Surgeons.

Prescription for Hope is the only program of its kind in the state, and its success has drawn the interest of hospitals in South Bend and Fort Wayne that might start similar programs, said Dr. Gerardo Gomez, medical director for Prescription for Hope and chief of trauma at Eskenazi Health.

Gomez and his team are happy to have other hospitals mimic the program, just as they did after Eskenazi Health CEO Dr. Lisa Harris returned from a meeting of public hospital executives where she learned about the success of a similar program at San Francisco General Hospital and Trauma Center.

Funded by a combination of public and private grants and donations, Prescription for Hope started with two so-called support specialists, the people who approach patients and their families about taking advantage of the program. So far, 341 have enrolled, Gomez said. Of those who are approached, he said, about 25 percent agree to participate.

Those who do are assessed by the support specialist and referred to help in up to seven areas: physical and mental health; education and training; social and recreational needs; housing and shelter; family and daily living issues; and employment. Most of the participants stick with the program, Gomez said, with relocation being one of the most common reasons people drop out.

Gomez said support specialists become the person participants can count on, checking in on their progress, driving them to appointments and generally helping them succeed. That support typically lasts about a year. Unfortunately, Prescription for Hope is down to one support specialist because of funding issues. Gomez said the goal is to have at least three.

One of only 26 such programs across the country registered with the National Network of Hospital-Based Violence Intervention Programs, Prescription for Hope is estimated to have saved Eskenazi Health $380,000 a year. And the program has influential advocates, such as the Indianapolis Metropolitan Police Department and Chief Rick Hite.

“It is this type of social service program, which digs deep into the personal, environmental and cultural factors of violent behavior, that can change our city and help prevent repeat offenses,” Hite said in lending support to Prescription for Hope’s nomination.

The other core supporters of the program are the Indianapolis Housing Agency, the Marion County Health Department, the Marion County Prosecutor’s Office and The Ten Point Coalition, a faith-based group trying to reduce violent crime in the city.

Some of Prescription for Hope’s biggest, and most persuasive, advocates are its participants.

People like Ebonnie Cross, whose whole family has benefited from the program since enrolling in 2012. Her siblings, including a brother who is in college on a scholarship he received with help from the program, are all in school now. Cross is studying to be a nurse and said she doesn’t know what would have happened to the family without Prescription for Hope. “I just want to thank everyone for their help and never giving up on us even when we wanted to give up.”