The drop in oil prices since July left more money in consumer bank accounts, but it was costly to Indiana’s pension funds.

The Indiana Public Retirement System has 6.8 percent of its $24 billion defined-benefit portfolio invested in commodities, a stake that fell 33 percent in the fiscal year to date, INPRS reported to its board of trustees this month.

Commodities helped drag the entire fund into negative territory, dropping 1.22 percent for the period of July 1 through Jan. 31.

Oil prices have already bounced off their January bottom, but the swoon demonstrated that non-traditional alternatives to stocks have downsides. Many investors fled stocks after the market crash of 2008, and INPRS was among them. 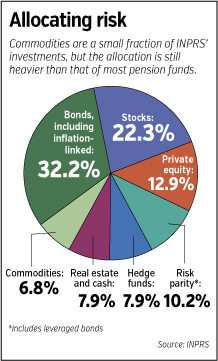 INPRS has only 22 percent of its portfolio in stocks, while the average among public funds is 51 percent, according to a survey by the National Association of State Retirement Administrators.

While commodities are one of INPRS’ smallest asset classes, the allocation is heavier than in most pension funds.

“Not that many public pension funds have a material amount of assets committed to commodities,” said Keith Brainard, NASRA’s research director.

The pension system, which oversees multiple public-employee and teachers’ funds, changed its investing strategy in 2012 and began allocating money to various asset classes that are supposed to do well under different economic scenarios.

The idea, called “risk parity,” is to eliminate wide swings in performance, even if it means forgoing the benefits of a bull market.

The result is a portfolio that’s heavy on bonds, representing about 32 percent, and includes private equity, real estate and hedge funds along with commodities.

INPRS’ outside investment adviser, Seattle-based Wurts & Associates, thinks the commodities portfolio will do well in the case of a growing economy, or rising inflation.

INPRS has a “reasonable” amount of commodities in the portfolio, and the impact on the fund “is not that egregious,” Chief Investment Officer David Cooper said during the March 6 board meeting.

The portfolio is closely aligned with a blend of the two major commodity indexes, of which oil is a major component.

A critic of risk parity, Ted Siedle, said the fact that INPRS’ commodity portfolio could bounce back is less important than the underlying risk of alternative holdings that lack transparency and come with high management fees.

“If there’s a global war, the price of oil will go up, I promise you—so what?” said Siedle, a forensic analyst whose investigation led to Christ Church Cathedral’s lawsuit against JPMorgan Chase. He said pensions should look for low-cost, transparent and highly liquid investments.

“They’re not doing that,” Siedle said of INPRS.

Many investment advisers look to commodities as a hedge against inflation, which was seen as one risk of the Federal Reserve’s massive bond-buying program. That hasn’t come to fruition because of weak labor markets and wages.

Given the uncertainty of the post-crisis era, Lynn Turner, a former chief accountant at the Securities and Exchange Commission who follows pension performance, said he can see why a fund would have allocated some of its portfolio to commodities.

“All of this is really a situation none of us have seen in our lifetime,” Turner said.

He also sits on the board of the Colorado Public Employees’ Retirement Association. Colorado still has a majority of its portfolio in stocks, but it also invests in private equity, venture capital and real estate. The pension fund has a small slice, 2.5 percent, in something called the Opportunity Fund, which includes commodities and timber.

Indiana shifted away from stocks during a historic run-up, and that appears to have cost it some performance points.

The fund was up 6.1 percent for the one-year period ended Jan. 31, INPRS reported.

Looking at a similar time frame for other large public funds, the Wilshire Trust Universe Comparison Service reported that the median return for public funds with $5 billion or more was 7.09 percent in 2014. (INPRS did not report its performance as of Dec. 31.)

For the fiscal year ended June 30, INPRS was up 13.7 percent. The average public fund returned 16.1 percent over the same time period, according to NASRA.

INPRS has also seen a positive surprise this fiscal year. Long-term bonds returned 5.35 percent at a time many people expected them to be hurt by rising interest rates. Instead, interest rates have fallen, driving bond yields down and prices up.•