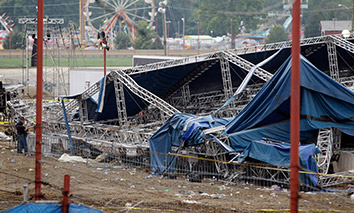 The state may be legally liable or responsible for some legal damages faced by a company that provided the rigging for a stage that collapsed at the Indiana State Fair in 2011, the Indiana Court of Appeals ruled Monday.

The decision said Marion County Superior Court Judge Theodore Sosin failed to articulate why he had granted summary judgment to the Indiana State Fair Commission in March 2014 after Mid-America Sound Corp. argued that the state was financially responsible by contract for the cost of its defense and any judgments against it.

Attorney General Greg Zoeller said Monday's ruling means the state could be liable for an undetermined amount, inconsistent with the financial limits specified in the Tort Claims Act that limits the state's payout. Zoeller said he plans to appeal the case to the Indiana Supreme Court.

"Our position is, Indiana law is clear that the state cannot indemnify a private party, nor was there any agreement here to do so, and we will continue to fight the stage rigging contractor's attempt to shift its legal responsibility for the State Fair tragedy onto the public," he said in a statement.

Seven people were killed and nearly 100 were injured in August 2011 when high winds toppled rigging and sent the stage roof onto fans awaiting the start of a concert by the country duo Sugarland.

The state previously had agreed to pay $11 million to 59 people.