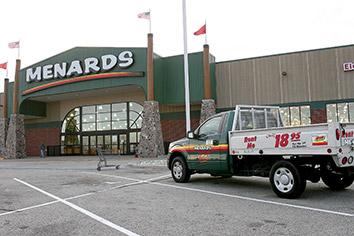 A Wisconsin-based home-improvement retailer is poised to build a store on the site of a vacant hotel it purchased on the city’s northeast side.

Menard Inc. bought the 18.5-acre parcel at the southeast quadrant of Interstate 465 and Pendleton Pike, and is shooting to open the hardware store by the end of next year, company spokesman Jeff Abbott said in an email.

Abbott declined to say when construction might start. The site is home to a former Ramada Inn that was later converted to an ExtendASuites hotel.

The 175,000-square-foot retail center will replace the smaller and older Menards at 6800 Pendleton Pike near Shadeland Avenue about one mile west. That location will remain open until the new store is finished.

The store will be among the largest in the Menard portfolio and will feature a full-service lumberyard with a covered warehouse, garden and appliance centers, a pet and wildlife section, and even a line of convenience groceries, Abbott said.

Menard purchased the property after receiving city approval Jan. 7 to rezone the site. The land is in Indianapolis but sits at the entrance to Lawrence.

The investment by Menard could help spur development at the gateway, said Jefferson Shreve, a city-county councilor and local business owner. Shreve owns the Storage Express chain and sold two acres of the land on which Menard intends to build.

“It will be helpful because it’s not the brightest and shiniest part of town as you head off of 465 there,” Shreve said

One of Shreve’s self-storage facilities sits south of the hotel property. He said a stoplight Menard plans to install at East 42nd Street just south of Pendleton Pike could stimulate development on the vacant parcel south of his storage facility and along I-465.

Shreve last month bought land on the south side near I-465 and plans to demolish a former hotel there to make way for a mixed-use development.

There is some relatively new retail development in the area already where Menard intends to build. A Walmart Neighborhood Market opened in 2004 on East 38th Street near Franklin Road to the east of the Menards site.

To build the store, the vacant hotel structure that sits on much of the site will need to be torn down. Built in 1970, the former Ramada Inn became an extended stay hotel in 2011.

Suburban Houston real estate investors Ryszard and Claire Zadow bought the troubled 187-room hotel at 7701 E. 42nd St. in an online auction for $1.3 million. The Zadows owned the Indianapolis franchise rights for ExtendASuites, a Texas-based company that started in 2010.

They closed the hotel following the sale of the property. Overall, Menard bought six parcels from a handful of property owners to cobble together the land for the store.

Along with the Zadows and Shreve, local developer Don Tharp also owned a piece of the land.

“It will be a big change for the east side,” Tharp said, “and it will improve the entrance into Lawrence.”

Eric Hillenbrand, a retail broker at Marcus & Millichap, is familiar with the property and also said the new store should give the area a “shot in the arm.”

“It will hurt that [Menards is] leaving 38th and Shadeland, but investing in a new location while taking outdated hotel stock out of the system seems to be a win-win,” Hillenbrand said.

Tom Cooler of CBRE represented Menard in the land acquisition.