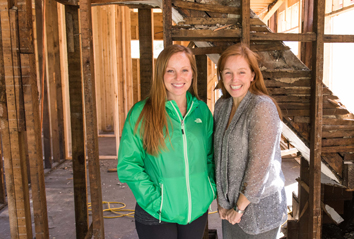 A mother-daughter duo that rehabs homes in the Fountain Square neighborhood is getting a shot at the national spotlight.

Karen Jensen, 55, and Mina Starsiak, 30, owners of Two Chicks and a Hammer, will be featured in a pilot show for a reality television series about their business airing at 11 p.m. Monday on HGTV.

The show, simply called "Two Chicks and a Hammer," could get a 12-episode run on the cable network, if it pulls in enough viewers.

“Part of me really wants it,” Starsiak said. “We’re not getting rich [from the show], but it’s a super-awesome experience. On the other hand, it will be so much work.”

Jensen and Starsiak started their company in early 2010 after rehabbing an eyesore at 23rd Street and Carrolton Avenue that Starsiak bought in 2007 for just $37,000. After living in it for five years, she sold it for $169,000 while pocketing some profit.

Starsiak, an Indiana University graduate, since has moved to Fountain Square, and so has Jensen, an attorney who practices family law and criminal defense work from an office in the neighborhood.

Without the assistance of bank loans, they’ve slowly grown the business and renovated roughly 20 homes in Fountain Square, performing much of the work themselves.

The two redheads caught the attention of production company High Noon Entertainment mostly by accident. A talent scout, actually searching for someone else, came upon their website early last year.

The firm interviewed the women via Skype and followed up by providing them a small flip camera to film themselves in action. High Noon trimmed the footage to a six-minute video to shop to networks.

HGTV bit and has first rights to the show.

“[High Noon] said it was the easiest pitch they ever made,” Jensen said.

The production company filmed the pair for six weeks last fall to make the pilot that airs on Monday.

So what attracted High Noon to the mother and daughter team? Perhaps their “entertaining and rough-and-tumble” personalities, Starsiak suggested.

“People think we’re fighting, and we’re actually not,” she said.

Jensen and Starsiak are prohibited from divulging too much information about the television show. But they maintain that what viewers will see is real with no staged scenes other than some re-enactments of actual events.

The two should know within the next few weeks whether the show gets picked up for a full, 12-episode season. If it does, Jensen will shut down her law practice to make time for the hectic filming schedule.

Each episode would feature them renovating a different home, requiring a much quicker pace than their normal workload of three to four homes a year.

Catherine Esselman, Downtown Indy’s real estate development manager, lives on the same block as a few homes in Fountain Square the women renovated. She hopes the television show shines a positive light on both the women and the neighborhood.

“They’re not afraid to get their hands dirty,” Esselman said, “but they’re also personable.”

They buy many of their homes through the Renew Indianapolis program, which helps homebuyers purchase abandoned properties. However, the inventory of available homes in Fountain Square is beginning to shrink as the revitalization of the neighborhood continues.

So the owners of Two Chicks and A Hammer are expanding into the adjacent Bates-Hendricks neighborhood to keep their business growing.

Jensen and Starsiak received a “minimal” fee for the pilot and will be paid the same amount no matter how successful their television show might become. They signed a five-year contract with High Noon, which can compensate them in other ways than money and can shop the series to other networks if HGTV passes.

The possibility of filming a reality television series comes at a time when Two Chicks and A Hammer is finding its footing.

Revenue climbed enough last year to allow Starsiak, a real estate agent who buys and sells the homes they renovate, to have more flexibility with her waitressing schedule at Pizzology. They declined to provide annual revenue but said their profit margins on each home only range from $10,000 to $40,000.

“The idea of the business is to make an impact in a neighborhood,” Jensen said. “We’re trying to rehabilitate a neighborhood one house at a time.”