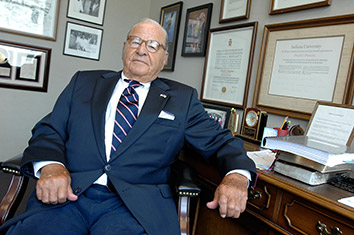 Danielson, a World War II veteran who turned down an offer to play baseball for the Brooklyn Dodgers so he could work for Indiana University, spent 39 years at Indianapolis-based City Securities Corp., including the last 34 as vice chairman.

He was longest-serving trustee on record at his alma mater, Indiana University. His tenure on the board lasted from 1958 to 1980, with 11 of those years as president.

“In Danny Danielson's passing, Indiana lost a great man who personified all that is best about the people of our state," Gov. Mike Pence said in a written statement. "He was the best of us, and I mark his passing with sadness but gratitude for having known this remarkable man of faith, family, community and civic involvement.”

“This guy was special,” Stitle said. “I truly believe that his devotion to the city and the state was greater than any business involvement he had. His personal desire to make this a better state for the citizens of Indiana was his passion.”

Stitle noted that before Danielson recently became ill, he was preparing to play an active role in a fundraising campaign for the Indiana University Foundation, where he had been a board member for many years.

Danielson served as vice chairman and then as co-chairman on two IU fundraising campaigns that raised a collective $800 million for the university.

He also is credited with spurring creation of IU’s Wells Scholar program in memory of former university president and chancellor Herman B Wells.

At IU, “Herman Wells is in a class by himself,” Stitle said. “Danny Danielson is second.”

Prior to joining City Securities in 1976, Danielson was president of accordion-door manufacturer Modernfold, where he started as a salesman in 1948.

Danielson attended IU on a baseball scholarship and graduated in 1942 with a bachelor’s degree in education. He then entered the Navy, where he fought in both the Pacific and Atlantic theaters of World War II. He was honorably discharged with the rank of lieutenant in 1946.

The Dodgers invited Danielson to report to training camp with their AAA team in 1946, but he turned down the offer to return to IU for a job at the Alumni Association. He also served a one-year stint as IU's interim head baseball coach.

Danielson’s numerous honors include two Sagamore of the Wabash awards, the Sachem Award and the Living Legend award from the Indiana Historical Society. He was also inducted into the Indiana Business Hall of Fame.

A calling is scheduled from 2 p.m. to 8 p.m. on May 14 at Sproles Family Funeral Home in New Castle. A funeral service is set for 2 p.m. on May 15 at First Presbyterian Church in New Castle, where Danielson was an elder.

Danielson's career was featured by IBJ in 2012. A video about his life by the Indiana Historical Society can be found here.