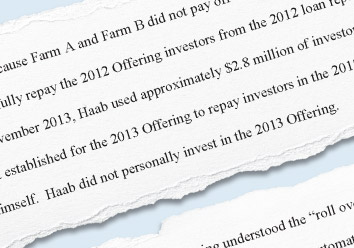 investment opportunities for his clients. Tobin J. Senefeld, a former stockbroker, approached Haab with some ideas. One idea involved making farm loans, according to court records, and the two went on to lead a multimillion-dollar lending operation that sent operating cash to farmers and promises of at least 10-percent annualized returns to investors. Attorney Jeffrey B. Risinger of Fishers later became a partner.

The trio’s strategy, based partly on farmers’ demand for cash amid tight credit markets, worked well at first. But some loans soured, and losses mounted. Rather than confess to their investors, the men covered the losses with money from new investors, creating a classic Ponzi scheme, according to a civil lawsuit filed last month by the U.S. Securities and Exchange Commission.

The SEC said the scheme involved $15 million, and investors are still owed $9 million. It’s unclear how much they’ll recoup.

“Unfortunately, in cases like this, the average result for the victim is that they get back 2 to 5 cents on the dollar,” said Mark Maddox, a former Indiana securities commissioner who has represented investors in disputes against investment firms for more than two decades.

MORE FROM IBJ
See excerpts from the SEC's documents.

Richard Kiefer, a partner with Bingham Greenbaum Doll who represents Haab and Veros Partners Inc., said his clients’ “No. 1 priority is to make sure investors receive their money back and the interest on their investments, and that’s always been their intention.”

The investment plan “was not a Ponzi scheme,” he said.

Wendling, a senior partner at Campbell Kyle Proffitt, has taken over the private-placement division of Veros Partners, as well as four holding companies allegedly involved in the scheme.

“That’s what I’ve been doing: Marshaling the assets of the companies and making sure that the funds are protected for the benefit of the investors,” Wendling said. “I would say that the individual defendants have been very cooperative in helping make that transition.”

Tim Warren, the SEC’s associate regional director in its enforcement division, said: “They came up short. Rather than ’fess up to the investors that they’d come up short, they persuaded them to roll over their investments into a new investment. And by doing that, they just dug themselves a deeper and deeper hole.”

According to court filings, Veros Partners is an advisory firm that had about 300 clients. Haab, Veros’ president, oversaw its investment advisory business and personally managed $160 million for 175 clients.

Dating back to at least 2010, Haab and Senefeld crafted private investment opportunities mostly involving farm loans. The men presented the offerings as operating loans that would cover expenses like seeds and equipment during growing seasons.

The loans had annualized return rates starting at 10 percent, and terms ranging from 12 to 14 months.

“Senefeld has described himself as a ‘matchmaker’ who found farmers in need of financing and then negotiated the terms of potential farm loans,” the complaint said.

“Senefeld knew these loans would be funded by Veros’ clients, and that Haab and Risinger would handle the offerings.”

Authorities said two 2012 offerings totaled $4.8 million. They say farmers failed to pay off the loans by the March 30, 2013, due date, which left investors $4 million short, including interest owed.

The defendants responded in part by paying $2.8 million to investors using cash directly from a new $9.7 million 2013 offering, regulators said. The men did not inform the 2013-offering investors about the maneuver, the SEC alleged.

The 2013 offering unfolded in a similar fashion. When it matured on April 30, 2014, farmers hadn’t fully repaid the principal and interest on its underlying loans. The SEC claimed the defendants then urged investors to “roll over” the remaining $5.5 million into a 2014 offering, implying that their 2013 loans had been repaid and that actual cash was going into another offering.

“Instead,” the complaint said, “Haab and Veros simply exchanged an investor’s remaining units in the 2013 Offering for the same number of units in the 2014 Offering, and postponed paying the investors the $5.5 million owed to them for one more year.”

They did the same thing in early 2014 with a $5.2 million “bridge loan” offering that wasn’t fully repaid, authorities said, persuading investors to roll over $1.9 million into the 2014 offering. That figure, combined with the $5.5 million rollover as well as $3.5 million newly raised capital, meant the 2014 offering involved $11 million in investor obligations.

Even as they used new money to hide old losses, the men continued to pay themselves, authorities allege. They raked in about $700,000 in “success fees” from the 2013 offering, authorities said, fees the defendants never disclosed to investors.

They also misrepresented Senefeld’s track record, authorities allege. Senefeld had settled a 1999 SEC complaint related to a fraudulent free-riding scheme, which involves buying and selling securities with expected cash instead of actual cash. The defendants said an employee of Senefeld’s engaged in the scheme, according to the SEC, when in fact Senefeld was personally involved.

In the Veros case, the defendants were supposed to transfer $9 million to investors in the 2014 offering by April 30, but didn’t. Meanwhile, authorities say, they were readying a 2015 offering.

“Defendants Haab, Risinger, and Senefeld have advised the Commission that their only recourse to repay the investors is by fees they expect to receive from other existing or planned offerings,” the complaint said, “including at least two 2015 farm loan offerings to Veros clients through which they are seeking to raise almost $25 million.”

Maddox said many Ponzi schemes start out as legitimate business deals, “and I think at Veros they probably were.

“And then you have a year when one or a couple of these farmers are unable to pay back their loans in a timely fashion. So what does Veros do? Well, they don’t go to their investors and say, ‘Guys, we’ve got a problem. And here’s my plan for dealing with it.’ Either they’re too embarrassed or they don’t want to affect their ability to raise any more money, so they say nothing about it.”•