Glen Dunkerson, chairman and CEO of Evansville-based Atlas World Group, has seen the relocation-services industry position itself for growth now that corporations have recovered from the recession and are moving more employees. In 2014, Atlas reported $878.3 million in revenue, up from $844.8 million in 2013. 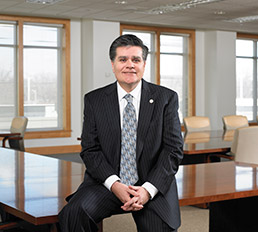 IBJ: What are the most common kinds of moves your company has been coordinating? Any trends since the recession?

DUNKERSON: I think the industry didn’t anticipate, like most of America, that the recession would last as long as it did. It took the corporate businesses that we work with a little longer before they started investing in moving employees again, but since 2010 we’ve seen a very healthy rise in corporate relocations. Government and military-related moves are flat, and that seems to be the case throughout the industry.

IBJ: Where are companies relocating employees?

DUNKERSON: Texas, North Carolina and Washington have been strong for us.

The relocations tend to be where the workforce is strong and there is a favorable policy for business. It also helps if it’s somewhere people want to move to, because more and more employees are turning down relocations. They don’t want to disrupt their family life. We move a lot of people within the Northeast—it’s still our predominant place for business—whether it’s New York to Connecticut or New York to Washington, D.C. Even during the recession, we didn’t slow down in Washington, D.C. It was like it never experienced a recession because it’s dominated by the government sector.

IBJ: When did you start noticing employees turning down relocation opportunities?

DUNKERSON: Before the recession. I think it’s because there was more than one primary earner in the home. The day of one-earner households—I won’t say it’s obsolete, but it’s unusual. Now you’re looking at getting two people into a new community and earning revenue as opposed to one. A lot of businesses have realized that, and they actually try to find that spouse a job in the new destination.

IBJ: What are some of the struggles?

DUNKERSON: We are always battling what I call “rogue movers.” These are people on the Internet that will sell their services but don’t really have the assets to do the work.

IBJ: How do you compete with rogue movers?

DUNKERSON: We try to continuously educate the average person on what they need to look for. People shouldn’t buy services from the cheapest service provider or from someone with a nice website. Good competition among carriers is healthy. What is unhealthy for us is battling the image that there’s corruption and false advertisement. We’ve had many cases where someone will throw up a banner of Atlas and say they’re affiliated, but they’re not. Our legal staff is always looking for that and trying to get it shut down.•