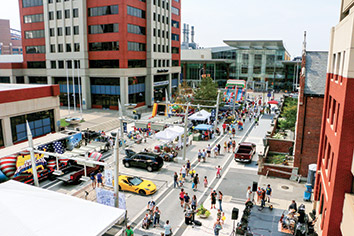 Anyone who witnessed the recently concluded USA Gymnastics confab got to see Georgia Street, a three-block pedestrian promenade constructed in 2012 for the Super Bowl, in all its glory.

On the west end, USA Gymnastics held its National Congress and Trade Show in the Indiana Convention Center. And on the eastern edge, at Bankers Life Fieldhouse, the 2015 P&G Gymnastics Championships took place.

Georgia Street, a foot-friendly link between the venues, filled with fans and conventioneers doing everything from dining at food trucks to listening to Brazilian music in the Countdown to Rio activity zone. It was a textbook example of the amenity’s being used to maximum effect.

It was also something of a rarity.

Georgia Street—rather, the section between the convention center and the fieldhouse—was conceived, somewhat hastily, as a way to create an eye-catching Super Bowl pedestrian zone in 2012. In that capacity, the $12.5 million, Ratio Architects-designed project succeeded brilliantly.

The challenge since, however, has been to find a sustainable role for the venue, one in which it only occasionally hosts three-block-long mega-bashes.

“I think, originally, people thought there’d be these kinds of Super Bowl-esque experiences year-round,” said Bob Schultz, senior vice president of marketing, communications and events for Downtown Indy, which manages the venue. “Well, that’s unrealistic. What’s become more realistic is to develop individual block experiences that are in tune with the personality of each block.” 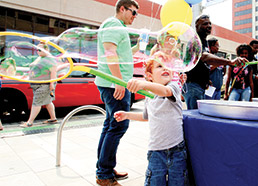 Liam Brackin, 4, of Knoxville, Tennessee, plays with bubbles during the Labor Fest on Sept. 5 on Georgia Street. (IBJ photo/Lesley Weidenbener)

Brett Voorhies bought into the concept early on. While president of the Central Indiana Labor Council, he switched the union’s primary Labor Day weekend event in 2012 from a parade to a festival—and located it on Georgia Street.

“We were the largest nonprofit event—next to the Super Bowl Village—the first year we had Labor Fest,” said Voorhies, who is now president of the Indiana AFL-CIO. 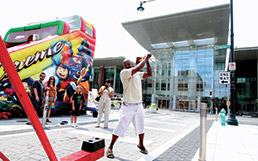 Kenneth Williams of Carmel tries to ring the bell in a strong-man game on the Indiana Convention Center end of the street. (IBJ photo/Lesley Weidenbener)

On Sept. 5, the council hosted its fourth annual Labor Fest, a free event featuring live music, food and a kids’ zone. Voorhies was there and lamented there aren’t more events like it on Georgia Street.

“We love using it,” he said. “Our members built it, and we think there should be a lot more events going on here. It gives Indianapolis a name.”

Labor Fest took up the entire, three-block length of the Georgia Street corridor. But most events do not.

The area that sees the most activity is the West Block, which sits next to the convention center at South Capitol Avenue. The Center Block is bracketed by South Illinois and South Meridian streets, while the East Block is bordered by South Meridian and South Pennsylvania streets, butting up to Bankers Life Fieldhouse. On non-event days, vehicular through-traffic is confined to two smallish lanes. During events, the lanes are often closed and the “boardwalk” between them used to accommodate anything from tents to seating to food service.

Chris Gahl, vice president of Visit Indy, said the space can be a formidable selling point with convention planners.

“It’s extremely unique to have the front door of your convention center step onto an outdoor space that can be closed to vehicular traffic and has built-in sound, built-in lights and staging, and turnkey event capabilities,” Gahl said.

Not that there aren’t problems—problems that didn’t surface until after the Super Bowl. One of the biggest is the fact that this “pedestrian” area is almost never traffic-free. Unless downtown is hosting a truly epic event, the cross streets—Meridian, Illinois and Pennsylvania—are not closed. And in the Center Block, a Circle Centre mall garage entrance pretty much always stays open.

“We can’t completely close the north lane because of the exit of the mall,” Schultz said. “The event has to activate on just the boardwalk and the south lane.”

Traffic is just as tricky on the East Block, where Harness Factory Lofts residents and those of another residential building must enter and exit via Georgia Street’s north lane. On rare instances, such as the street’s New Year’s Eve celebration, residents are assigned temporary parking spots elsewhere. On other occasions, officers policing events might escort neighborhood residents through the festivities to their garage.

Often, even the biggest conventions require only the popular West Block space. Gen Con, the city’s largest gathering, fills it with food trucks.

About half of all West Block events are convention-related. Other uses include Indianapolis Colts tailgate parties, Food Truck Fridays and Workout Wednesdays.

“Originally, this three-block street was seen as a complete events venue for the Super Bowl,” Downtown Indy’s Schultz said. “What we did when we started managing it post-Super Bowl is to look at the unique characteristics of each, individual block.”

Those characteristics include a lot of quirks. For instance, since the West Block is free of brick-and-mortar eateries (except for Mikado Japanese Restaurant), it’s the only one that welcomes food trucks. And since fewer businesses on this block have entrances onto Georgia Street, traffic concerns and blowback from road closures aren’t as thorny.

But one of the block’s major tenants is St. John the Evangelist Catholic Church, which has occupied 126 W. Georgia St., at Capitol Avenue, since 1871. It’s right on top of whatever shenanigans this most popular block might be employed for, from street parties to concerts.

Schultz said Downtown Indy meets with church officials weekly to iron out logistics, including what to do about weddings that take place during Georgia Street events. Once, a local tabloid staged a “Best of Indy” party that included a burlesque troupe in its lineup. Complaints from St. John got the event moved down the street to East Block.

“And if there’s a big party out there that has thumping bass music, we do our best to either relocate the stage so it’s not near the church, or at least have them power down the bass during services or a wedding,” Schultz said.

The Center Block’s chief tenants include the Omni Severin Hotel. This section of the street has lots of trees, which makes it less than ideal for concerts, or events requiring large tents. As a result, Center Block events tend to be smaller.

One of the block’s other stakeholders is the restaurant Harry & Izzy’s. Bryn Jones, director of marketing for both Harry & Izzy’s and St. Elmo Steak House, sees the pedestrian promenade as a plus. So much so that he even tolerates its most problematic event, Food Truck Fridays, in which dozens of food trucks line up during lunchtime.

“I think if it’s pulling people downtown, I don’t think it has a huge negative impact on our business,” Jones said. “It certainly isn’t helping, but if it gets people excited about being downtown, that’s a good thing.”

Since only the biggest events make it all the way down to East Block, the collection of bars that resides there sometimes “make their own fun” by renting boardwalk space from Downtown Indy.

“We really don’t have a lot of events down here,” said Kilroy’s Bar & Grill General Manager Jade Abel. “And a lot of the events we have, we throw ourselves. We’re able to rent out our section of the street and pretty much have free rein to do what we want.”

Downtown Indy-sponsored East Block functions include the Saint Patrick’s Day Blarney Bash and New Year’s Eve festivities. During the 2015 Final Four, Kilroy’s and other bars pooled their resources to rent the block themselves. But even if an event doesn’t reach quite to their neck of the woods—or if it doesn’t appeal to the alcohol and chicken wings crowd—Abel isn’t complaining.

“If it’s, say, a kid-friendly thing, it will sometimes just be a wash,” she said. “But most of the time, the extra foot traffic is going to help us out.”

“You look at other cities that have entertainment districts like this, and what makes them successful is the ability to be completely pedestrian at times,” Schultz said.

Other blue-sky improvements would include adding second-floor balconies overlooking the street so diners could eat while watching the festivities. Or covering a portion of the thoroughfare, as was done for Louisville’s Fourth Street Live.

Unfortunately, all of this costs millions—which Downtown Indy doesn’t have to spare. The block rental revenue it uses to maintain Georgia Street’s boardwalk and public amenities (the city handles road maintenance) wouldn’t make a dent in such projects. There’s not even cash to correct relatively smaller shortcomings, such as a lack of signage to identify Georgia Street to the casual observer as anything other than an oddly designed city thoroughfare.

Still, Schultz said, all things considered, the street has done quite well.

“I would argue that it’s become a much bigger deal than anyone thought it would be,” he said. “We have found a way to balance all of this and still find more and more events that we can bring in. Will that continue? Yes. We have to keep it clean, safe and beautiful. … But I think its best days are yet to come.”•