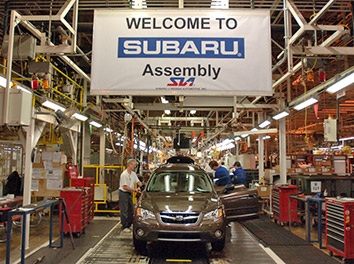 Fuji Heavy Industries Ltd.’s Subaru sees sales of 700,000 vehicles in North America as early as in 2017 as it dodges a slump in China.

The carmaker may sell more than 600,000 vehicles in North America in 2015, five years ahead of its mid-term plan, CEO Yasuyuki Yoshinaga said in an interview at the company’s headquarters in Tokyo. Subaru has gained market share in the U.S. as the brand long known for all-wheel-drive vehicles continues to win more mass-market customers.

To further strengthen its lineup in the United States, Subaru will introduce a seven-seat sport-utility vehicle exclusive to the North American market, Yoshinaga said. Production of the SUV will start at its plant in Lafayette after 2017, he said, without being more specific.

It's unclear how much the new push will boost production at the Indiana plant, which employs about 4,000 Hoosiers and is the only Subaru assembly plant outside of Japan. In May, Yoshinaga said the facility could raise production to 394,000 vehicles by the end of 2016, up from about 365,000 in 2014.

A Subaru official at the Indiana plant could not be reached for comment Monday morning.

American consumers purchased more passenger vehicles than their Chinese counterparts for a second straight month in August, helped by affordable fuel prices and as an equities rout in China sapped discretionary spending. Subaru, which earlier this year put its China production effort on hold, is cutting exports to the world’s largest auto market and is shipping more cars to the U.S., where its deliveries have risen for 45 consecutive months.

“The China slump won’t have any impact on our earnings,” Yoshinaga said on Friday. “Even if we divert the gap in China sales all to the U.S., we still won’t meet the demand there.”

The Japanese automaker’s market share rose to 3.2 percent in the U.S. this year through August, compared with 3 percent in the same period a year earlier, according to researcher Autodata Corp. North America is Subaru’s largest market, led in sales by its Outback crossover and Forester SUV.

Fuji Heavy, which has the highest operating margin among Japanese carmakers, will keep its dividend payout ratio in the 20 percent to 40 percent range, Yoshinaga said. The carmaker’s payout ratio was about 20 percent last fiscal year, compared with about 30 percent at Toyota Motor Corp., Nissan Motor Co. and Honda Motor Co., according to data compiled by Bloomberg.

“We don’t want the dividends to fluctuate a lot from year to year,” he said. “By keeping the ratio within a broad range, we’ll be able to pay stable dividends even if our earnings deteriorate a bit.”