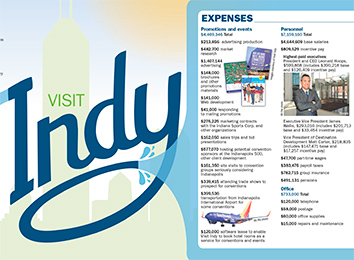 The vast majority of revenue came from the Capital Improvement Board, the arm of the city that finances, builds and operates the Indiana Convention Center and Lucas Oil Stadium, among other publicly owned venues.

Expenses are spread across categories ranging from advertising to employee pensions. (Visit Indy's staff of 40 does not operate the convention center.)

Click here for details on where the organization's money came from and how it was spent.