Home » City block in Fountain Square on the market 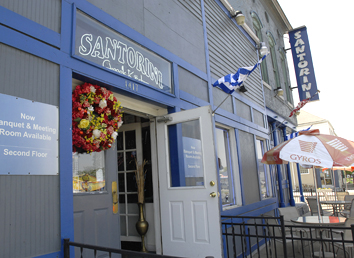 Almost an entire city block in the Fountain Square neighborhood that’s hit the market might attract the next big development to the bustling area southeast of downtown.

The seven parcels on Prospect Street are available for a total of $1.5 million, said Taki Sawi, who owns the properties with his wife, Jeanette.

The couple operates Santorini Greek Kitchen, a Fountain Square staple for 15 years, on part of the property. The restaurant will remain open, and the building housing it will stay, Taki Sawi said.

"I think this will be a great opportunity for anybody to tear them down and develop something in Fountain Square," Sawi said. "Fountain Square is growing very fast."

The Sawis once had planned to tear down adjacent buildings to the east of Santorini and build a banquet center there. But when the Biltwell building became available at 950 S. White River Parkway, they decided to buy that building, put the banquet at that location, and sell the Fountain Square properties. The couple this year embarked on a major renovation of the nearly century-old, three-story building just north of Interstate 70 on downtown’s southwest side.

The 1.4-acre site in Fountain Square that's on the market sits just east of the neighborhood’s core, where Prospect intersects Virginia Avenue and Shelby Street,.

The property bounded by Laurel and Spruce streets already is attracting attention from potential buyers, said Ted McClure of McClure Commercial & Industrial Real Estate LLC, who is co-listing the site. With 400 feet of frontage on Prospect, the block “allows for someone to do something fairly substantial on it,” he said.

The most likely reuse for the property would include a mix of apartments and retail, based on the block’s proximity to the heart of Fountain Square, said longtime business owner Lynton Calvert. He owns the 70,000-square-foot Fountain Square Theatre building at the corner of Prospect and Shelby streets

“This area has become more and more of an attraction,” he said, “so if somebody wanted to redevelop that parcel into apartments, I think it’s possible.”

Indeed, Fountain Square and neighboring Fletcher Place have undergone a renaissance since Calvert’s arrival in 1993, bolstered in recent years by the Cultural Trail linking them to downtown.

The increased activity and the arrival of more restaurants have made both of the neighborhoods attractive housing options. The Mozzo and Hinge apartment projects on Virginia Avenue are both fully leased, and Slate is set to welcome its first residents in mid-November.

“Everything that’s been built has been leased out in 45 days,” Calvert said.

On Prospect Street, just west of the block that’s on the market, the Kuma’s Corner burger joint opened in August. Across the street, chef John Adams’ Marrow soul food concept is expected to begin serving soon. And the Pioneer Italian restaurant in the former Deano’s Vino location at 1110 E. Shelby St. opened Oct. 5.

“With Kuma’s now open and the other activity, I don’t see why that won’t eventually be developed,” he said of the available block.

McClure is co-listing the property in Fountain Square for the Sawis with Kathy Brown of KMB Realty Group.