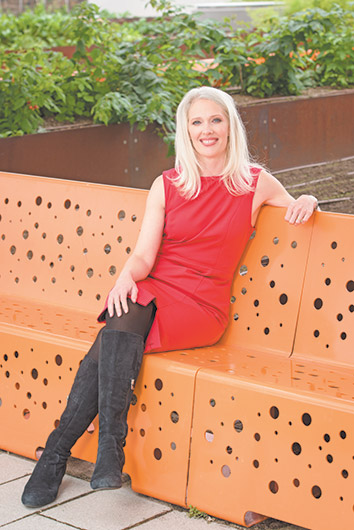 In 2004, when Jessica Barth became chief counsel for what’s now known as Eskenazi Health, the ambitious, transformative plan for the new hospital complex wasn’t spoken of publicly. But Barth had an inkling of it when she accepted the job and was more than ready for the challenge.

Barth was an Indiana University English literature and French major who got a master’s in English literature from the University of Michigan before graduating first in her class from IU’s Maurer School of Law (where she also served as articles editor for the Indiana Law Journal). She clerked for Judge Bruce Selya of the U.S. Court of Appeals before joining Faegre Baker Daniels, where she practiced in the litigation group.

The same person who lured her to Faegre Baker Daniels, Matt Gutwein—whom Barth met while he was an adjunct professor at IU—took the leadership role at Eskenazi Health’s parent and asked if she wanted to join his team.

“I did not have much of a background in health issues,” she admitted, “but I came over and learned it on the job.”

Among her initiatives was the creation of the Wishard Medical-Legal Partnership, the first program of its kind in Indiana.

“The concept,” she said, “is that working with a patient, a doctor or other provider can identify issues that health care might not have the ability to impact but could impact the patient’s health—if housing conditions are subpar and a landlord isn’t cleaning up. When you have partnerships, you can bring lawyers into the team to address those issues.” The partnership has helped those dealing with such concerns as domestic violence, immigration issues and disability matters.

Barth’s job took on a higher profile with the passing of the referendum opening the door to construction of the $754 million Eskenazi Hospital. By that time, she had been promoted to vice president of legal affairs, making her lead in-house counsel.

The monumental task, she said, included working out contracts with the architects and construction manager—“major negotiations that took months and months and months. We awarded hundreds of packages of publicly bid work, all governed by very specific statutes.”

For several years, she spent 40 percent of her time on the project. “Our mantra was always, ‘On time, on budget,’ and we really hustled to move in on time.”

After the successful opening of the facility in 2013, the workload didn’t disappear. In her current role, she counsels a safety-net health system that sees nearly 1 million outpatient visits a year, as well as its sister division, Indianapolis Emergency Medical Services. She manages the system’s litigation and represents it in the drafting and negotiation of complex contracts. Besides the legal department, she’s also responsible for risk management and credentialing.

“And now,” she added, “we’re getting ready to do budgets.”

Barth chairs the governance committee on the Indiana Hospital Association’s Council on Hospital Governance and the advisory board for the Hall Center for Law and Health at the Indiana University Robert H. McKinney School of Law.

She also serves on the boards of the Indianapolis Public Library Foundation and Arts for Learning. The latter, she said, “opens up a lot of opportunities for kids who might not otherwise have the chance, with schools’ de-emphasizing the arts.”•