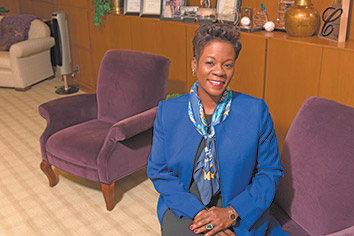 Melody Birmingham-Byrd, the Indiana president of Duke Energy, is the youngest of seven children. She grew up in Chicago and worked part time in manufacturing and other areas while earning a bachelor’s of science degree in organizational leadership and management from Purdue University.

The week after graduation, she was already working for GM in upstate New York. “I didn’t have the opportunity to travel the world,” she said. “I just hitched my car to a U-Haul and drove to Rochester.”

From the auto industry, she jumped into the energy field, joining Carolina Power and Light.

It was not as big a shift as it sounds, she said. “I focus on people, processes and technology, regardless of the product or service. I went into this new industry not really considering the difference,” Birmingham-Byrd said. “Purdue really prepared me for being flexible and able to adapt to any environment.”

Birmingham-Byrd had become vice president of the Southern Region for Progress Energy Carolinas by the time her company in 2012 merged with Duke Energy, now the largest electric power company in the United States.

By the time, Birmingham-Byrd assumed the top position in Indiana in June of this year, she had earned her MBA from Strayer University.

Her responsibilities in her current role require an equal focus on the present and future. “We can’t always determine tomorrow’s weather. But we do have to plan for the future,” she said.

“We know technology is rapidly changing and that customer expectations are changing,” she said. “We’re influenced by environmental regulations, and we have to look five to 10 years out. We have to lock in fuel at the best possible price points. We have to look at the fleet. When is the best time to commission a generating station?”

Engaging with stakeholders—which often have conflicting interests—is key. “We have to understand what their needs are, how we can support them, and how we can collaborate with their business, so we can contribute to their success,” she said. “I’m looking beyond the functional side. I’m looking at the success of the company and of the state on a much broader scale.”

Birmingham-Byrd said she’s fortunate—“and I don’t take this lightly”—to have a team committed to the vision and strategy of the company.

Community affairs managers, government affairs representatives, regulatory attorneys and other team members “make the job easier than it probably should be,” she said.

“It’s a very demanding time right now in the energy industry, and they want to do the right thing,” she said. “And if we aren’t doing the right thing, they will speak up.”

Birmingham-Byrd serves on the boards of the Indiana Electric Association and the Indy Chamber. She’s cautious of commitments that take away weekend time from her family but appreciates working with Special Olympics Indiana. “I can take my children to events and it doesn’t present a conflict.”

“There is no downtime for me,” she said. “I would love to take a nap one day. What I wouldn’t give for a nap.”•