Plans for more development along a blossoming stretch of East 16th Street are taking shape in the form of apartments, another restaurant and even a microbrewery or distillery.

The once-blighted 15-block section from Alabama Street east to the Monon Trail has attracted activity the past few years, with varying success. But 2016 could be a pivotal year for the thoroughfare.

On Oct. 29, King Park Development Corp. received approval to rezone a nearly one-acre site at 1101 E. 16th St. to allow for coffee roasting, and the brewing and distillation of liquor and spirits. 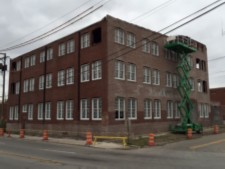 The site, adjacent to the Monon, is home to the vacant Tinker Flats building, which has attracted interest from several breweries and distilleries, said King Park Executive Director Steven Meyer. He hopes to announce tenants early next year.

“When we started marketing the building, we were adamant that we wanted it to be a destination,” he said, “and have a retail component where folks on the Monon and in the neighborhood could engage the building.”

The upper two floors likely will be office and event space.

King Park’s rehab of the 30,000-square-foot, 1915 structure is about half finished, with exterior work slated for completion in a few weeks, Meyer said.

His group partnered with locally based Third Street Ventures after Slain Capital in Noblesville pulled out of a deal to convert part of the building into a hub for food-and-beverage startups.

King Park stepped in to buy the building in January from a local group for $305,000 and is using a $1.3 million grant from the U.S. Department of Housing and Urban Development, administered through the city, to help with redevelopment costs.

The building originally was home to a factory making bank furniture. In the 1950s, an addition was built on the south end of the property to accommodate a recycling center.

Across the street to the north, the former Gleaners Food Bank of Indiana Inc. building is under contract by local apartment developer TWG Development LLC, which hopes to close on the four-acre property in March.

John Watson, whose company refurbished the old Bush Stadium into Stadium Lofts, bought the Gleaners building upon its departure in 2010.

As part of a $22 million renovation, TWG plans to keep the front office part of the building and demolish the warehouse portion to construct 200 apartments. The project would include a mix of affordable and market-rate units.

“With what’s already happening on East 16th Street, that area is going to change dramatically in the next four or five years,” TWG CEO Joe Whitsett said.

TWG hopes to start construction in April and finish in mid-2017.

A few blocks to the west, Lincoln, Nebraska-based real estate firm U.S. Property Management had been planning to invest up to $8 million to convert a vacant building into a mix of apartments and retail uses. But  real estate sources say U.S. Property may be re-evaluating the project and might opt solely for a residential development.

The company owns the nearly century-old building at the southeast corner of East 16th and Bellefontaine streets that housed the Omar Baking Co. from 1927 to 1966. It has received approval to rezone the 1.7-acre property and envisioned 49 apartments and commercial space in the three-story structure.

Calls to the developer were not returned.

One of the bright spots along the stretch is the Tinker Street restaurant, which opened at 402 E. 16th St. in January.

Now, co-owners Thomas Main and Peter George— once one of the city’s most prominent restaurateurs—are preparing to launch another eatery, across from Tinker Street.

They bought the small, dilapidated one-story building on the south side of the street and hope to present plans Dec. 2 to the Indianapolis Historic Preservation Commission, George said.

The yet-to-be-named restaurant could open next summer and would serve Italian fare.

“The neighborhoods have embraced us,” George said. “That was the intention from the beginning, to put another restaurant there.”

East 16th Street is the dividing line between the Old Northside to the south and Herron-Morton Place to the north.