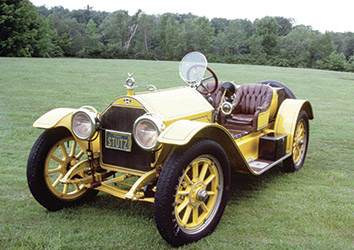 Indiana’s rise to prominence as a manufacturing powerhouse was the result of a number of factors, including access to energy and raw materials and a transportation system that made the state The Crossroads of America.

In the 19th century, Indiana boasted some of the largest natural-gas deposits in North America, and the state had abundant coal resources. In the early 20th century, the nation’s steel industry rose along the shores of lower Lake Michigan. In the first decade of the century, U.S. Steel—based in Pittsburgh and the nation’s first billion-dollar corporation—built its mammoth Gary Works in Lake County to take advantage of water transportation of iron ore, limestone and coking coal.

That steel flowed south into northern and central Indiana on an unparalleled network of railroad tracks that had been under construction since the 1840s. With rail delivery of inexpensive raw materials and outbound shipment of finished products, central Indiana manufacturers were soon among the nation’s most efficient. The story of the state and its capital city’s long association with the automobile industry is perhaps the best example of Indiana’s century-and-a-quarter relationships with manufacturing and corporate America.

The Haynes Automobile Co., for example, was chartered in 1905 by Elwood Haynes of Portland, south of Fort Wayne. Haynes, one of the more intriguing figures in Indiana history, claimed the honor of operating the first gasoline-powered automobile in America on July 4, 1894. Haynes had conceived of the idea of a self-propelled road vehicle as early as 1892; following his move to Kokomo in December that year, he engaged a local machine shop to build a horseless carriage from his sketches.

Hoosier Elwood Haynes built the first automobile in 1894 and helped create an automotive manufacturing industry in central Indiana in the early 20th century.

By the first decade of the 20th century, 11 firms made automobiles and parts in Anderson. Perry Remy and his brother Frank were making 50,000 automobile magnetos a year in Anderson by 1910. Entrepreneurs flocked to Indianapolis in the hope that the Hoosier capital city would become the headquarters of the nation’s automobile industry.

Daniel W. Marmon and his sons Howard and Walter were making luxury automobiles in Indianapolis shortly after the turn of the century. In the late 1800s, the Marmons had teamed with Ellis and Addison Nordyke to create Nordyke and Marmon Inc., a major manufacturer of flour milling machinery. In 1902, Marmon’s two sons built a factory on West Morris Street and began making luxury automobiles.

Harry C. Stutz arrived in Indianapolis from Ohio in 1903 and built a transmission plant on East 10th Street. Ten years later, he began making Stutz automobiles at a new factory at 10th Street and North Capitol Avenue. By the end of the decade, the Stutz Bearcat set the standard for quality in the luxury automobile line.

At the end of the decade, brothers Fred and August Duesenberg opened a plant at Washington and Harding streets to manufacture what would turn out to be the last of the luxury cars to make Indianapolis synonymous with quality automobiles from 1910 to 1925.

In 1913, Henry Ford had introduced the moving assembly line at his Highland Park, Michigan, factory, and the subsequent dominance of the Model T Ford sounded the death knell for the locally owned Indianapolis auto manufacturing industry. Ford’s economies of scale were quickly copied by General Motors, Chrysler and Dodge, and the substantial capital needed to build and operate giant automobile assembly plants gravitated toward Detroit.

But the automobile industry couldn’t afford to ignore Indianapolis and central Indiana for long. The region was too centrally located to major U.S. population centers and was well served by one of the best rail networks in America.

As early as 1914, Henry Ford erected a building in the 1300 block of East Washington Street to assemble, sell and repair Model T Fords. To save shipping costs, Ford assembled cars on the site until the early 1930s. In 1956, Ford came back to Indianapolis, this time to build steering assemblies for all its North American-made cars at a new assembly plant on English Avenue southeast of Irvington.

Delco-Remy, the General Motors subsidiary that made most of the automotive giant’s batteries, generators, distributors and coils, has had a century-long relationship with central Indiana. When Charles Kettering’s Delco began making electric self-starters for Cadillac Motor Co., the Remy brothers in Anderson decided to get out of the business. They made magnetos, automobile starters that had to be hand-cranked. The Remys eventually sold their business to Indianapolis banker Stoughton Fletcher, who held on to Remy Co. for only a couple of years. In 1916, he sold his interest to United Motors, which also bought Delco from Kettering.

Two years later, General Motors acquired United Motors and Chevrolet. It merged Delco and Remy in the 1920s and made Anderson the world capital of automobile electrical equipment manufacturing.

Chrysler has been part of the central Indiana manufacturing community for 90 years. The company came to Indiana in 1925 when it bought a machining plant in New Castle and turned it into one of the company’s major manufacturing centers for suspension, steering and transmission components.

During the 1950s, Chrysler undertook a major expansion of its transmission capabilities in the Kokomo area, and in 1960, the company bought the American Foundry Co. plant on South Tibbs in Indianapolis. In the 21st century, Chrysler built a world-class transmission plant near Tipton to supply its popular line of Dodge Ram pickup trucks.

In the 1930s, International Harvester built a major facility on West Washington Street to manufacture trucks and farm machinery, as well as a foundry and engine plant on Brookville Road on the city’s east side. By the time the Japanese bombed Pearl Harbor in 1941, Indianapolis and central Indiana were key players in the nation’s automotive and heavy-industry sectors.

Although the region dodged many of the woes that plagued the automotive industry in the wake of the 1980s recession, the “Big Three” presence in central Indiana began a decades-long shrinkage.

Ironically, the automotive phoenix that arose from the ashes of the recession helped re-establish Indiana as a major automotive manufacturer. During the 1980s and 1990s, Japanese auto manufacturers followed the interstate highways from the Rust Belt into Indiana and the mid-South. Toyota built a huge complex near Princeton in Gibson County, and Subaru and Isuzu began producing automobiles at a major facility near Lafayette. In 2008, Honda of America began producing Civics at a 1,600-acre complex off Interstate 74 northwest of Greensburg.

The re-emergence of Indiana as an auto manufacturing and assembly center was fueled by hundreds of original equipment manufacturers (OEMs), from one end of Indiana to the other. Since Indiana was the only state with three Japanese vehicle assembly plants, many of the 21st century OEMs were Japanese-owned. But homegrown OEMs like Grote Industries in Madison, which makes LED lighting for heavy trucks and military vehicles, are also well represented in the category.

It was little wonder that Indianapolis and central Indiana helped lead the nation’s manufacturing economy back from the abyss of the Great Recession of 2007-2009. In the following five years, the state placed second nationally for the number of manufacturing jobs it gained, trailing only Michigan.•