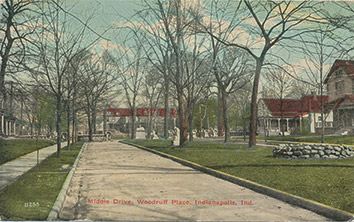 “From tiny acorns grow mighty oaks” might be an apt metaphor for the growth of housing in the Indianapolis metropolitan area.

In the city’s beginning during the early 19th century, housing consisted of a few crude log cabins clustered along Pogue’s Run in what is now downtown. For much of the 19th century, growth was confined to the Mile Square for the simple reason that one was forced to live within walking distance of where one worked. Zoning was virtually non-existent. Residential neighborhoods were adjacent to retail centers, and industrial and commercial properties sat side by side. As late as 1912, patients at St. Vincent Hospital on South Street were evacuated when an industrial plant next door caught fire.

Indianapolis celebrated the new century by pushing out the city’s boundaries. On Jan. 1, 1900, an electrified street railway car of the Indianapolis, Greenwood and Franklin Railroad arrived in downtown Indianapolis from the nearby Johnson County community of Greenwood.

The Interurban, as it became known to several generations of Hoosiers, revolutionized transportation at the turn of the century. With its 40 mph speed and hourly schedule, the interurban made it possible for rural residents to shop and work in Indianapolis. Before the end of the year was out, the first interurban had extended its route south to Franklin, and a second interurban began service to and from Greenfield in June 1910.

The 1900s were a time of city expansion. In 1901, Indianapolis annexed the village of Irvington, which was then the home of Butler University. The U.S. Army platted Fort Benjamin Harrison on several hundred acres northeast of the city in 1904, and Beech Grove, already the location of several large railroad machine shops southeast of Indianapolis, incorporated in 1906. University Heights on the city’s far-south side got its charter the following year.

The city’s business and civic leaders began a push north along the Meridian Street corridor that would continue into Carmel and Hamilton County well into the next century. The northward expansion of affluent residential neighborhoods reached Fall Creek by 1910. The attraction of living in what was then suburbia was fueled by the outward expansion of the Indianapolis streetcar lines. Residents of the suburban neighborhoods north of the city could board a streetcar at Illinois Street and Fall Creek Boulevard and be whisked downtown in 15 minutes or less.

Residential growth was also taking place to the south during the 1910s. The city’s Fountain Square neighborhood at Virginia Avenue and Prospect Street by 1910 had one of the largest shopping centers in Indianapolis outside downtown. By the end of the decade, Speedway—to the west—was developing a reputation for automotive innovation. Carl G. Fisher located his Prest-O-Lite Storage Battery Co. along Crawfordsville Road west of Indianapolis to manufacture automobile headlamp assemblies. Fisher, Arthur Newby, Frank Wheeler and James Allison built an automobile testing ground in Speedway in 1909; two years later, the Indianapolis Motor Speedway would host the first 500 Mile Race.

The 1920s saw the advent of the Good Roads Movement, and one of the first streets paved in central Indiana was Washington Street, the urban extension of U.S. 40, the National Road. Paved streets facilitated the transition from streetcar transportation to automobile traffic, pushing residential development further out from the city core.

Residential growth slowed perceptibly for the 15 years of the Great Depression and World War II, but the end of the war in 1945 ushered in a decades-long housing boom. One difficulty in the postwar conversion was finding housing stock for veterans starting families. Indianapolis developers had to search far and wide for building supplies; much of the lumber used in housing stock during the immediate postwar era came to Indianapolis from the Carolinas and Georgia.

Indianapolis became a city on wheels in the 1950s. Because people suddenly had automobiles, they could live in suburban neighborhoods and subdivisions not necessarily served by public transportation. During the 1950s, suburbs expanded past Arlington Avenue on the east side; to Beech Grove on the south side; past Speedway on the west side; and to Nora-Westfield Boulevard on the north side. By 1960, Marion County was adding nearly 6,000 homes a year. For example, from 1955 to 1959 alone, 3,400 homes were built in the Eagledale area on the west side.

That trend would become even more pronounced in the decades to follow. The first of what would become more than 42,000 miles of interstate highways began appearing on the drawing boards in the late 1950s. Indianapolis transportation planners began assembling parcels around the city to create a beltway connecting the interstates entering the city. Construction on I-465, the 55-mile-long freeway circling the city, began in 1958. Residential and retail growth followed the new system. By 1972, less than 20 percent of the department-store retail dollar in Marion County was spent downtown.

The increasing suburbanization created a patchwork quilt of government. By 1967, Marion County had 60 separate government units; Indianapolis Mayor Richard Lugar’s plan to consolidate city-county government into what became known as Unigov passed the General Assembly in 1969 and was signed into law by Gov. Edgar D. Whitcomb.

A telling indicator of the city’s population push northward came in 1974 when St. Vincent Hospital opened its facility on West 86th Street. Pike and Washington townships on the far-northwest side had led the city’s demographic bulge in the 1960s and into the 1970s. Judge S. Hugh Dillin’s landmark school busing decision gave an impetus to suburban growth after 1972. Even the oil price hikes of the 1970s and the mortgage interest spikes in the late 1970s and early 1980s couldn’t halt the rapid housing growth in Hamilton, Boone, Johnson and other surrounding counties.

Suburban growth around Indianapolis continued unabated during the 1980s. Population outflow from Center Township was particularly evident. From 1950 to 1990, more than 150,000 people moved out of the urban core.

One bright spot in the out-migration picture involved the gentrification of old urban neighborhoods in and adjacent to the Mile Square. Restoration of the Lockerbie, Old Northside, Chatham Arch and Cottage Home neighborhoods began to take shape during the 1980s, accelerated during the 1990s, and became a distinct demographic trend in the 21st century.

Much of the city’s growth during the 1980s and 1990s was to the north. Pike and Lawrence townships added large numbers of people during the 1980s, partly because of the growing attractiveness of Eagle Creek and Geist reservoirs for residential and commercial development.

Hamilton County, just north of Indianapolis, enjoyed a growth boom during the period, led by developments in and around Carmel. The Fishers area, which contained fewer than 1,000 people in 1970, produced explosive growth during the 1980s and 1990s. Fishers was the gateway to the I-69 corridor northeast of the city, and development soon extended along the corridor to Noblesville and the Morse Reservoir area. Residents no longer thought an address on 246th Street sounded strange, just as earlier generations had gotten used to the idea of addresses on 86th Street or 96th Street.

Housing trends that began in the late 20th century only accelerated in the 21st century. Downtown developed into one of the hottest residential real estate markets in the metropolitan area as millennials sought urban amenities. The suburbs continued to grow, with Hendricks County enjoying a real estate boom following the opening of the new Indianapolis International Airport.•