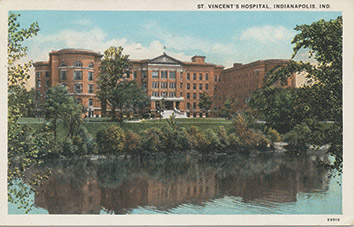 Indianapolis has been at the heart of the state’s health care community for nearly two centuries. Hospitals; a major pharmaceutical manufacturer and marketer; world-class life, health, and property and casualty insurers; and a thriving 21st century life sciences sector all have found fertile soil in Marion and surrounding counties.

The city’s first settlers made do without little in the way of health care. The first doctor didn’t arrive until 1821, and the local population lived in fear of such outbreaks as measles and whooping cough, which were particularly lethal for young children. The city had 14 practicing physicians by 1836, and the Indianapolis Medical Society was founded in 1848, the same year the predecessor of Central State Hospital opened. The Civil War saw the establishment of the Indiana Sanitary Commission and the reopening of the Indianapolis City Hospital.

The latter half of the 19th century ushered in an era of medical enlightenment. Several medical schools opened in Indianapolis during the 1870s, and Indianapolis City Hospital—which the federal government had turned over to Indianapolis after the Civil War—primarily housed charity patients. Religious orders of strong-minded women, including the Roman Catholic Daughters of Charity and the Methodist Deaconess Society, wrote the next chapter of Indianapolis health care, opening St. Vincent Hospital in 1881 and the predecessor of Methodist Hospital in 1899.

Indianapolis became a center of pharmaceutical manufacturing in 1876 when Civil War veteran Col. Eli Lilly opened a pill manufacturing firm, incorporated in 1881, and hired his first research pharmacist in 1886.

The city’s health care industry came into its own during the early years of the 20th century. Indiana University Medical College incorporated several existing institutions in a building at Senate Avenue and Market Street in 1909.

Several of the city’s hospitals began the move north during the decade, a trend that would continue throughout the 20th century. St. Vincent Hospital expanded in 1913 from downtown to a site on Fall Creek Parkway on what was then the suburban north side. From 1905 to 1908, Methodist Hospital built its new hospital at 16th Street and Capitol Avenue.

In the 1920s, the city also began establishing a reputation for cutting-edge, high-technology life sciences manufacturing. Eli Lilly’s collaboration with Canadian scientists opened the way for the city to become the nation’s center for manufacturing insulin, a breakthrough treatment for diabetes. When the Great Depression descended in 1929, Eli Lilly and Co. proved to be a bulwark of the city’s economy. J.K. Lilly Sr., his son Eli and company management had seen the hard times coming. When the nation’s banks closed on March 6, 1933, Lilly wired money orders totaling more than $50,000 to cover the expenses of its sales force out on the road.

Increasing automobile traffic and suburban growth spawned the biggest change in Indianapolis business during the post-war period of the 1950s and 1960s. Many insurance companies moved north along the Meridian Street corridor, and Community Hospital opened in 1956 at 16th Street and Ritter Avenue to serve the growing population of the east side.

On the south side of downtown, urban renewal was corporate-driven. Eli Lilly and Co. grew dramatically through the 1950s, and that growth became almost exponential during the 1960s. Lilly’s McCarty Street campus had 30 buildings in 1953 when Eli Lilly, grandson of the founder, became chairman of the board. By the early 1970s, the McCarty Street campus contained more than 50 buildings and covered 58 acres. A 12-story headquarters rose on the site in 1967, and Lilly continued its expansion at its Kentucky Avenue campus on the site of the old stockyards. 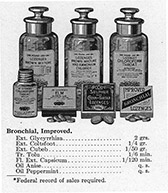 Before it made its breakthrough insulin discoveries in the early 1920s, Eli Lilly and Co. made patent medicines, like these 1906-era throat lozenges.

A perhaps more telling indicator of the city’s population push northward came in 1974 when St. Vincent Hospital opened its new facility on West 86th Street. The move from its longtime home on Fall Creek Parkway was further proof that the city’s growth was increasingly outward.

At the end of the decade, Terre Haute insurance salesman Steve Hilbert moved to Carmel and founded Conseco, a company that would revolutionize the nation’s life insurance industry during the 1980s and 1990s. Hilbert took Carmel-based Conseco public in 1985 and built it into a major force in the insurance and financial services industry by the end of the decade. The company would as spectacularly implode during the early years of the 21st century.

Eli Lilly and Co., the city’s best-known firm, laid the groundwork for sensational growth in the 1990s when it introduced Prozac in 1987, a pharmaceutical compound that would become the world’s most widely prescribed antidepressant. In the summer of 1999, Lilly announced a $1 billion expansion of its McCarty Street campus immediately south of the Mile Square and of its Kentucky Avenue production facility southwest of downtown.

Lilly’s announcement, coupled with the completion of Conseco Fieldhouse immediately north and east of the Lilly campus, created a corollary wave of development in the southeast quadrant of the Mile Square.

The city’s health care and insurance community barreled into the 21st century amid a host of changes. Conseco collapsed and retrenched after a spectacular crash linked to bad investments in mobile-home ownership, and Lilly struggled with bringing new compounds down the pipeline for growth.

Indiana’s life sciences industry created a $59 billion annual economic impact for the state, as a result of being the headquarters for such firms as Biomet, Cook Medical, DePuy Orthopaedics, Dow AgroSciences, Eli Lilly and Co., Anthem and Zimmer and the North American headquarters of Roche Diagnostics. Beckman Coulter, Boston Scientific, Covance and Mead Johnson all have major operations in the state.

The city’s hospitals continued the move into the doughnut counties, with Community, Methodist and St. Vincent all expanding into fast-growing Hamilton County, while St. Francis expanded its south-side base into neighboring Johnson County. Indiana University Health and Methodist Hospital merged, with plans to construct a 21st century campus on the site of Methodist Hospital. Marian University opened the first new medical school in nearly a century, an osteopathic college.

As the state zeroes in on its bicentennial, the future of health care and insurance in central Indiana appears bright.•