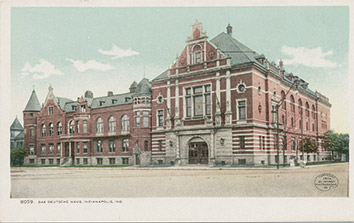 In 1822, Pennsylvania native George Smith began publishing the Indianapolis Gazette in the newly established Hoosier capital city. The Gazette was the region’s first venue for news and advertising, and it was joined a year later by the Western Censor & Emigrants’ Guide, founded by a pair of Kentucky natives to oppose the presidential candidacy of Andrew Jackson.

The city’s two earliest newspapers typified the practice of journalism in the 19th century. They were civic boosters, encouraging the growth of Indianapolis, but they also were rigidly partisan when it came to politics. The city’s first daily newspaper, the Indiana Journal, began publishing mid-century, and another trend began manifesting in the late 1840s and 1850s. Julius Boetticher began publishing the city’s first German-language newspaper, Volksblatt, in 1848, and German-language newspapers were very much a part of the city’s media establishment through the remainder of the century.

The Indianapolis News appeared in late 1869 and was the city’s first afternoon daily newspaper. The News would continue publication until its closing in the early 21st century.

The growth of the city’s African-American population after the Civil War engendered the establishment of several publications that served the black community. The Indianapolis Leader began publication in 1879, while the Indianapolis Recorder—which continues to be published—dates its founding to 1896.

The city’s population nearly quadrupled from 1890 to 1930, and the introduction of electric-driven typesetting machines like the Linotype and web letterpresses made possible the fast, efficient and profitable delivery of daily newspapers. Advances in photography and the rise of wire services gave Indianapolis readers access to local, national and world news.

The emergence of a middle-class, white-collar community at the turn of the 20th century created demand for a morning newspaper, a demand filled by the establishment of The Indianapolis Star in 1903. By the 1920s, Indianapolis had three daily newspapers, the morning Star and the afternoon News and Times. The decade was a golden era for investigative journalism, and the Indianapolis Times won a Pulitzer Prize in 1928 for exposing the political control of Indianapolis and Indiana by the Ku Klux Klan. The News followed suit with its own Pulitzer in 1932 for a series on wasteful spending by the city and state governments.

Print journalism in the city got its first meaningful competition during the 1920s when radio burst upon the scene. A Purdue University engineering graduate went on the air with the city’s first radio station, 9JK, on New Year’s Eve of 1921. It wasn’t until 1924, however, that the city got its first permanent radio station, WFBM. It was heavily supported by Merchants Heat and Light Co., a predecessor to Indianapolis Power & Light Co., which used the air waves to promote such modern electric conveniences as toasters, washing machines and vacuum cleaners.

From the 1920s on, print and broadcast media proved to be effective vehicles for mass marketing. The rise of national advertising agencies in New York and Chicago spawned local agencies in Indianapolis, which increasingly served media clients throughout the state.

The 1940s ushered in a new era in Indianapolis journalism, when Eugene C. Pulliam acquired The Indianapolis Star during World War II and the Indianapolis News four years later, in 1948. Pulliam and his son, Eugene S. Pulliam, consolidated the two newspapers in offices on North Pennsylvania Street downtown, upgraded the news content, and modernized the printing facilities. The rise of the Pulliam empire proved too much for the Indianapolis Times, which ceased publication in October 1965.

While the Pulliam newspapers were experiencing their strong growth spurt, print journalism faced a new competitor. The Hoosier capital city’s first commercial television station went on the air on Memorial Day 1949 with live coverage of the Indianapolis 500 Mile Race, and WFBM-TV was awarded a Federal Communications Commission license as a CBS affiliate later that year.

WTTV went on the air in late 1949 as an NBC affiliate and later became the flagship of the independent Sarkes-Tarzian network. WISH-TV signed on as the city’s NBC affiliate in 1954, and switched to a CBS affiliate the next year. WLW-I on Channel 13 (which later changed its call letters to WTHR) affiliated with ABC in 1957 but became the NBC affiliate in 1979 when it switched networks with WFBM-TV, Channel 6. WFYI-TV, the city’s public television station, began broadcasting in 1970.

Television came into its own in the 1960s, with local programming that featured film actress Frances Farmer and exercise maven Debbie Drake. Television also became the go-to medium for broadcasting local sports events, including the Indiana High School Athletic Association basketball tournament. Radio, meanwhile, began a decades-long switch to FM, with WIFE dominating the local airwaves with Top 40 music in the 1960s; WFMS with its country format; and WFBQ with “The Bob & Tom Show” the dominant radio stations locally in the 1970s and 1980s. 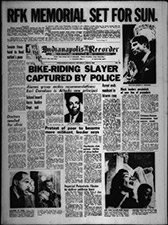 The Indianapolis Recorder, which covered the tumultuous events of 1968, dates its founding in the Hoosier capital city to 1896. (Photo courtesy of IUPUI Newsroom)

Radio and television discovered network and local news as a way to gain an edge in the competitive Indianapolis marketplace. The introduction of videotape in the late 1970s gave a stamp of immediacy to local news programming that had been lacking in the era of film. The entry of WXIN-TV as a charter affiliate of Fox Broadcasting Co. in 1988 further honed the local news competition, as did the introduction of satellite TV capacity in the late 1980s and early 1990s. WTHR, the NBC affiliate, went from last to first in the local ratings wars, primarily because NBC had the lucrative NFL broadcasting rights from the mid-1980s to the late 1990s (which meant WTHR broadcast the Indianapolis Colts games).

The digital age created unprecedented change in the city’s media marketplace. Radio made the transition to digital broadcasting, and Indianapolis native Jeff Smulyan became a major player in the industry in the 21st century. Specialty publications created a strong niche after 1985. Indianapolis Business Journal dominated business news in the 1990s and the new millennium, and Nuvo provided an anti-establishment voice.

In 1999, Central Newspapers, the Pulliam corporate vehicle, closed the Indianapolis News after 130 years of publication. The next year, the Pulliam family sold the company to Virginia-based Gannett Co., one of the nation’s largest media companies.

High-definition television and digital cable continued the technological evolution of audio-visual communications in the 21st century. A major upheaval in the Indianapolis market occurred in 2014 when WISH-TV, the CBS affiliate in the market for nearly 60 years, lost the affiliation in a dispute with the network; WTTV, an independent for almost its entire history, was awarded the CBS affiliation. The rise of social media in the 21st century gave a new immediacy to news, as blogs and tweets redefined the dissemination of information.•