Home » Indiana to kick off bicentennial celebration this week 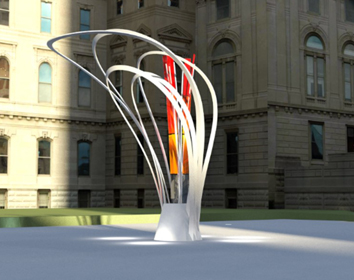 Indiana this week is preparing to kick off a yearlong celebration leading up to the state's 200th birthday next December.

An Olympic-style torch that will visit all 92 of Indiana's counties and cover 2,300 miles next fall as part of the state's bicentennial events will be unveiled Friday at the Statehouse in downtown Indianapolis.

Bicentennial flags provided to all cities, towns and counties will also be raised at noon Friday, which is Indiana's 199th birthday.

"We want all Hoosiers engaged. We want all communities celebrated. It's very important to leave a legacy and prepare Indiana for the next 100 years of change," Skillman told The Fort Wayne Journal Gazette.

The state is spending more than $50 million on bicentennial-related activities around the state. Most of that funding will go for several construction projects, including a bicentennial plaza at the Statehouse and an inn at northern Indiana's popular Potato Creek State Park.

Plans for the Indiana Bicentennial Plaza were released Wednesday morning. The projects calls for the installation of two art pieces at the plaza, located at the intersection of Robert D. Orr Plaza and Senate Avenue on the grounds of the Indiana Government Center complex.

The first sculpture, called "Enduring Flame," will be located at the north end of the plaza, and the second sculpture, "Living Time Capsule," will be installed near the south end.

Out of 104 proposals, a selection committee awarded the creation of the Enduring Flame sculpture to New York artist Osman Akan, and the Living Time Capsule piece to Dale Enochs from Bloomington.

Also planned for the bicentennial is a new state archive building. Indiana's archives are currently stored in an Indianapolis warehouse that is not climate-controlled or accessible to the public.

The bicentennial commission has also endorsed hundreds of "legacy projects" around the state. Those include a two-day "Frontier Fort to Statehood" event next June at Historic Fort Wayne, which recreates the rustic military fort erected in northeastern Indiana during the state's formative years on the American frontier.

The many events will hopefully inspire Indiana residents to "take a moment and ponder" the occasion, said Perry Hammock, executive director of the bicentennial commission.

"It's a singular moment in history that we can remember the past, look at where we are now and talk about the future," Hammock said.