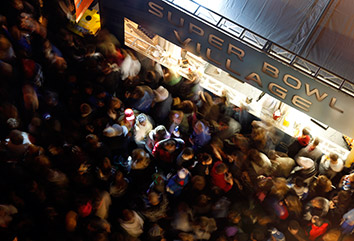 Organizers in Indianapolis and Minneapolis held news conferences to say they had formally distributed their bids to the 32 team owners, though neither group was willing to provide many specifics to the public. New Orleans organizers were even quieter.

With a May 20 vote looming, nobody wanted to give away any secret strategies.

Sorting out this contest could be a tough one for the owners.

Minneapolis will have a brand new stadium by 2018 and is hoping to join the long list of cities that invested hundreds of millions of dollars in shiny, new facilities. The NFL has frequently rewarded those cities, including Dallas, Indy and New York, with Super Bowls, though not always on the city's first bid. Minneapolis last hosted the 1992 Super Bowl.

New Orleans will build its pitch around the fact it has hosted 10 Super Bowls, tied for the most with Miami, and would like the NFL's title game to be a prominent feature in the city's 2018 tricentennial celebration. When the city last hosted the game, in 2013, a blackout caused a 34-minute delay of the game between Baltimore and San Francisco.

Indianapolis had the fewest problems of any recent host and the 2012 game was widely praised by fans, media and league officials with only one major complaint — not enough downtown hotel rooms. Indy organizers noted in their 900-page bid that two more large downtown hotels could be completed in time for the game.

New Orleans is planning upgrades to the state-owned Superdome. Indianapolis is not planning any changes to Lucas Oil Stadium, and Minneapolis' stadium shouldn't need any work.

Organizers from each city will have 15 minutes to make presentations. Those three team owners will each have an additional five minutes to make their pitch. Owners will then eliminate the third-place finisher in one vote and eventually come up with a winner.

"New Orleans presented a very flexible bid allowing the NFL a number of choices in terms of how they would like to configure the Super Bowl footprint for official events and fan activities at multiple venues," said Sam Joffray said, a spokesman for the Greater New Orleans Sports Foundation.

Indy and Minneapolis have both been working on private funding to help cover the costs.

Richard Davis, co-chair of the Minneapolis effort and chief executive of U.S. Bancorp, told reporters that just within the first seven days of the drive, local companies pledged enough money to cover 75 percent of the estimated $30 million to $40 million needed to defray the costs. They expect to line up the rest within the next few weeks.

"We're going to celebrate winter. And we should, because we do it well — better than anyone," Davis said. "We're going to talk to the owners about how it's about time that the NFL brought America's game around the country, like a caravan, and started taking it out from the Southern states and bring it around to the rest of the world. We should be the first."

Indianapolis heads to Atlanta with roughly $30 million already pledged — enough to cover the entire cost of the host committee. That was a major selling point in each of city's two previous bids. Melangton also noted they planned to expand the Super Bowl Village, which originated with Indy's first Super Bowl, and will have another legacy project in the community.

Colts owner Jim Irsay, who hasn't been seen publicly since his March 16 arrest on preliminary charges of driving while intoxicated and four counts of possession of a controlled substance, will make the closing pitch. He's been undergoing treatment since March 18.

"There's no question he will be there," Colts COO Pete Ward told The Associated Press after the news conference.

Instead, the question is whether Irsay's presence could have an impact the vote.

"A lot of running the Super Bowl has to do with the execution," she said. "And no city in the country has done that better than this one (Indy), hands down."