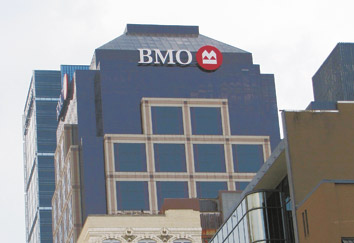 Chicago-based The Hearn Co. said Wednesday afternoon that it and an equity partner paid $40 million to buy the 28-story BMO Plaza in downtown Indianapolis.

The building at 135 N. Pennsylvania St., previously owned by White Plains, New York-based True North Management Group, hit the market in late September. IBJ reported in January that Hearn had it under contract.

Among Hearn's other holdings is Chicago's John Hancock Center, one of the Windy City’s most recognizable office towers.

But the biggest change Hearn plans to make is improving the building’s restaurant space by giving it street-level visibility. The current eatery space on the second floor, last occupied by Market Café, is vacant again.

“We will abandon the notion of any viability of a second-floor restaurant,” McKim told IBJ. “The second floor has been a revolving door.”

McKim said Hearn still needs to determine how to configure space to accommodate a street-level diner and what to do with the second-floor area.

True North took ownership of the building in October 2009 as the lender for New York-based Crown Properties Inc. and Connecticut-based Greenfield Partners, which were in default.

Avison Young represented seller True North in the sale. Bill Ehret and Nancy Merritt of Avison Young had been leasing agents for the building and worked with Avison Young's capital markets team on the sale.

For Hearn, it’s the firm’s first foray in Indianapolis. The company in 2014 had pursued the purchase of Regions Tower. New York City-based The Nightingale Group LLC paid $65 million, or $98 per square foot, to buy the 36-story building from a local group that included Michael S. Maurer, a shareholder in IBJ Media, publisher of IBJ.

Hearn is eyeing other opportunities in Indianapolis, McKim said. It bought BMO Plaza in partnership with Boston-based CrossHarbor Capital Partners.

“We really like Indianapolis, and we hope this is the first of many deals,” he said.