Forty-six states already permit what Indiana is poised to start this summer: allowing physicians to write prescriptions after talking to patients on their laptops or smartphones, with no office visit required.

On July 1, Indiana will fully jump into the age of telemedicine, a booming industry worth $14 billion, driven by pressures to lower costs and increase access to health care.

Gov. Mike Pence signed a law last month reversing a long-standing law that required physicians to meet in person with patients before writing a prescription. The legislation was supported by physician associations, hospitals, insurance companies and the growing network of technology companies that link physicians with patients.

Soon, patients in Indiana will be able to sit at home, in their car, or in the office and ask a doctor about a cough, ear pain, headache or other malady, through a video call. And the doctor can ask the patient to step over in the light, aim the camera at the rash or twisted ankle, and after a few questions, prescribe medicine and send the order to a pharmacy.

“This is the future of things,” said Dr. Stephen Tharp, an internal medicine physician with the St. Vincent Medical Group in Frankfort and past president of the Indiana State Medical Association. “We have to utilize new technologies to help people.”

Indiana will become the next frontier for the telemedicine industry. The American Telemedicine Association, based in Washington, D.C., estimates the number of telemedicine networks at 200, providing connectivity to more than 3,000 sites.

Already, large players are gearing up to expand their offerings in Indiana. They include telemedicine companies such as Dallas-based Teledoc, which sells online physician services as employee benefits, and health insurers such as Indianapolis-based Anthem Inc., which launched its own online service three years ago in other states.

“We’ve been getting a lot of calls from our clients, employers like Eli Lilly and Cummins, wondering when it’s coming,” said John Jesser, vice president for Anthem. “So now everyone knows it’s July 1.”

What Anthem is offering is a service called LiveHealth Online, a two-way video that connects patients with board-certified doctors. Members sign up in advance online, enter insurance information, and view doctor profiles. The physicians take video calls and can answer questions without appointments or waiting. A typical online visit costs $49, the company said.

“People have an ankle sprain and want to know if they have to go to the emergency room and get an X-ray,” Jesser said. “The doctors can help you, show you where to press on your ankle, help you rule out things like a fracture. It can save you from spending a whole Saturday afternoon in an ER, just waiting for an X-ray.”

Patients save an average of $200 for each online visit, plus hours of time, compared with visiting an urgent care center,walk-in clinic, doctor’s office or other treatment venue, Anthem concluded in a recent internal study.

That’s exactly why Rep. Cindy Kirchhofer said she sponsored the bill. At her full-time job as a risk manager for Franciscan St. Francis Health, she hears from the whole spectrum of health care, from patients and families to health providers and administrators.

She said she knew from firsthand experience that it wasn’t necessary to visit a doctor in person to get treated for a recurring medical problem. A few times a year, Kirchhofer suffers fever blisters, and needs medicine.

“They hurt. They sting. I know exactly what it is,” she said. “And so occasionally, I might need a prescription for it. But it might take a week to get in to see my doctor.”

Kirchhofer, R-Beech Grove, who chairs the House Public Health Committee, said she heard repeatedly from employers, insurers and health providers that wanted to reverse Indiana’s law and make it legal to prescribe using telecommunications rather than an office visit.

“And then I thought, ‘You’re talking about access to health care services in rural Indiana,’” she said. 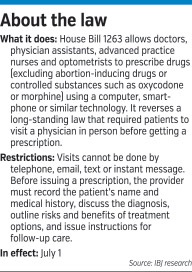 Several rural parts of Indiana, notably in the southern and western part of the state, have low access to physicians, according to Purdue University’s “Health Care Access in Indiana” report, and are designated as “health professional shortage areas,” according to the U.S. Department of Health and Human Services.

Even in middle-class and affluent areas, where doctors are plentiful, health providers and insurers have been trying to reduce the number of hospital visits and length of stay in hospitals. And patient groups have been welcoming any moves to cut the cost and time spent getting medical care.

Against that backdrop, the global market for telemedicine is expected to more than double, to $34 billion, by 2020, according to Mordor Intelligence. That includes almost any conceivable medical service and technology used to provide care from a remote location, using video, email, smartphones, apps and wireless tools.

So why did it take so long to come to Indiana?

Technically, Indiana already allows the use of video and phone consultations with doctors, a subset of telemedicine. But it hasn’t allowed doctors to prescribe remotely, so the state has nowhere near been a full player.

“Indiana is a state that is traditionally slow to adopt all kinds of innovations,” Tharp said. “A lot of people like to think they’re more thoughtful and a little more careful. And there are some concerns.”

One concern is whether patients would try to go doctor-shopping online to getprescription drugs with street value. The bill prohibits doctors from writing prescriptions for controlled substances such as oxycodone or morphine if they haven’t had an in-person meeting with the patient.

Another concern is whether patients would avoid seeing doctors altogether. Some doctors say they support telemedicine as a way to expand access to care in acute situations, but it’s no substitute for regular, in-person visits.

“Telemedicine is wonderful, but if someone accesses all their health care electronically, we don’t believe that’s optimal patient care,” said Dr. Richard Feldman, former Indiana state health commissioner and chairman for government affairs for the Indiana Academy of Family Physicians.

To address that concern, he pushed to add a sentence requiring doctors to advise patients of the risks and benefits of various treatment options, “including when it is advisable to seek in-person care.” The Legislature included that requirement.

“It doesn’t solve the entire problem,” Feldman said, “but the change makes me much more comfortable that there’s now a legal responsibility on doctors to inform