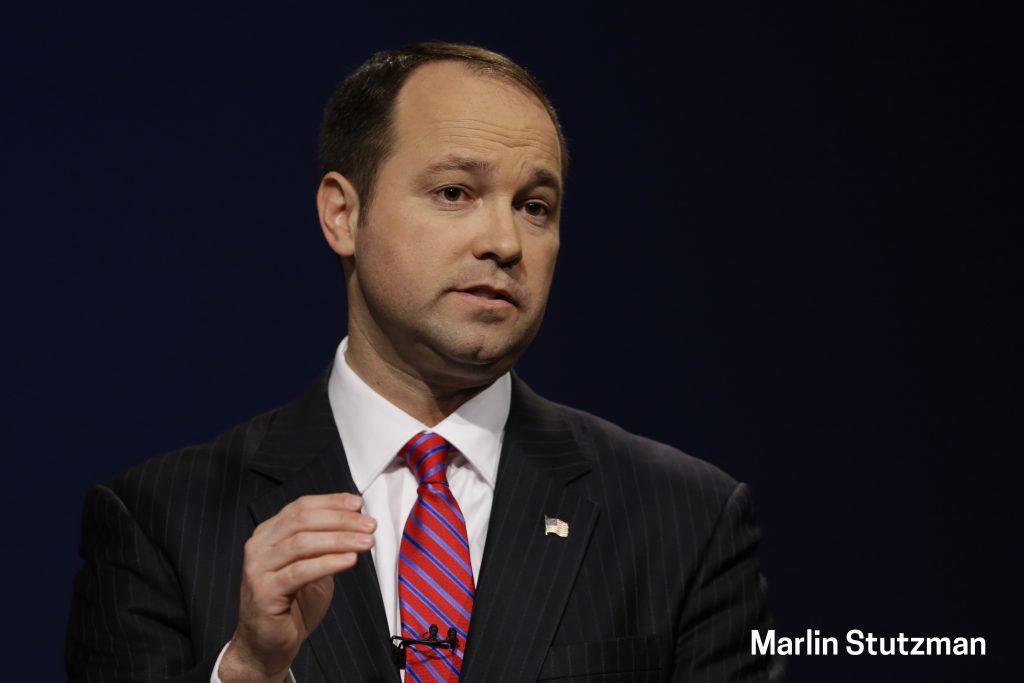 A Facebook page belonging to the wife of an Indiana congressman touted the family's visit to the Ronald Reagan presidential library in Simi Valley, California, with photos showing the two children by the conservative icon's grave and the couple in front of a "humble" wooden table where Reagan signed a massive tax cut.

Although a caption on one of the photos describes the trip as a "family vacation," documents obtained by The Associated Press show Rep. Marlin Stutzman's Senate campaign paid more than $2,000 for the four airline tickets to Los Angeles and covered expenses for a van rental and Hilton hotel room recorded during the August trip. Federal Election Commission guidelines forbid the use of an official campaign fund for personal expenses.

On Wednesday, Stutzman campaign manager Josh Kelley said the candidate repaid the campaign fund last week for the family's portion of the trip after the AP began asking questions about it. Kelley said Stutzman was told last August by a campaign attorney that the trip was a "legitimate" campaign expense because Stutzman's wife and children joined him at some political functions, but he decided to repay it "in the interests of full disclosure."

The California visit represents just a small part of the over $300,000 in flights, vehicle charges, meals and hotel stays Stutzman's campaign fund has spent since the tea party-backed Republican went to Washington in 2010 on a pledge to oppose special interests, an AP review found. That's roughly three times more than Rep. Todd Young, his GOP Senate rival in the May 3 primary who joined the House about the same time.

Regarding the six-day California trip, Kelley declined to elaborate about the political events he said the family attended, other than to say some included donors and constituents. Kelley said the Hilton expense was incurred in Indianapolis the night before the California trip but provided no specifics.

"It was a campaign trip," said Kelley, who earlier told the AP that, "It is irresponsible to imply that Marlin Stutzman has not always done his best to be in compliance with all FEC rules and regulations."

The Facebook pictures from the Reagan library were removed from public view several days after the AP asked about the trip.

Michael Toner, who was chairman of the FEC under President George W. Bush, said family vacations can't be charged to a campaign account and that the candidate must pay for all personal expenses, even if the trip includes political activities. If the candidate later refunds the campaign, "it doesn't completely resolve the situation because campaign funds were still used for a personal expense at the outset," Toner said.

Previously, during one eight-month period in 2015, Stutzman used his campaign fund and congressional allowance to reimburse himself $13,100 for mileage driven on a personal vehicle — the equivalent of about 40 roundtrips from his hometown of Howe in northern Indiana to the state's southern border touching Louisville, Kentucky. The expenses covered a period when Stutzman was casting votes in Congress and his campaign was billing for dozens of airline tickets.

Stutzman's campaign declined to respond to questions from the AP about his wider spending habits, including whether the mileage was largely for in-state trips or travel to and from Washington. Members of Congress are allowed to use their office allowance to pay for travel back to their districts, but the roughly nine-hour drive from Capitol Hill to Howe is about 570 miles, or $308 in one-way mileage at the congressional rate. Traveling by plane is much faster and often a fraction of the cost.

The records didn't indicate what vehicle or vehicles racked up the mileage, including who owned them. In late 2012, Stutzman's campaign bought a vehicle with a $10,000 down payment. By the time it was paid off in June 2015, the running tab surpassed $60,000 for automobile-related expenses, including car payments, insurance, registration and repairs.

Since 2010, Stutzman has billed his campaign for $129,872 in airfare and hotels — including one charge to the Ritz Carlton — compared to $26,378 for Young. Stutzman also paid out more than $50,000 for food and drink, including over $24,000 to the Capitol Hill Club, a Republican invite-only establishment that boasts the "nation's most influential people" as its members.

Stutzman presents himself as a small-town farmer with a cure for the "Potomac fever" he says is gripping a national political establishment that has refused to rein in government spending at taxpayers' expense.

Jordan Libowitz, a spokesman for the group Citizens for Responsibility and Ethics in Washington, says Stutzman's spending habits trend high, but are not unheard of for a congressman.

"It sounds high, but it's not completely out of the norm for members of Congress," Libowitz said. "It certainly follows that general pattern of getting to Washington and then starting to use campaign funds to live a more lavish lifestyle than before. Members of Congress tend to live a little higher on the hog."

But Paul Helmke, a former Republican mayor of Fort Wayne who is now a public affairs professor at Indiana University, says Stutzman's campaign fund use is at odds with his public image.

"For someone who's held himself out as running against the establishment, from small town Indiana, the image of fancy hotels and steakhouses doesn't fit," said Helmke, who in 1998 won the Republican primary for U.S. Senate but lost in the general election to former Democratic Gov. Evan Bayh.

During a recent speech at the Conservative Political Action Conference, Stutzman took a swipe at the political establishment.

"Growing up on a farm, I never thought that the lessons of cleaning cow manure out of a cow pen would be so useful in my life," he said. "But serving in Congress, I'm finding plenty of bull."